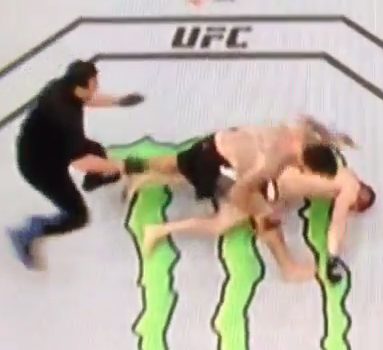 After 14 years in the UFC, 36-year-old Frank Mir (18-9) continues to impress. After four straight losses between 2012-2014 it looked like Mir’s days in the UFC were all but done. But a first round KO of Antonio “Bigfoot” Silva in Januray showed us Mir still had something left in the tank — AND NOW THIS! Take a look as the former UFC heavyweight champion flattens Todd Duffee (9-3) just 73-seconds into their bout Wednesday night at UFC Fight Night 71 in San Diego.

Most people thought if Mir won, it would be on the ground and not beating Duffee at his own game standing. But Mir was aggressive and pushed back against Duffee, stood in the pocket and let it rip, and it paid off!

What would you like to see next from Frank Mir?