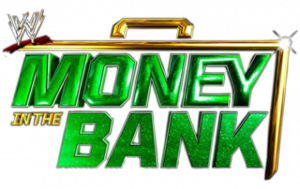 Join us here tonight at PMN for live updates from the WWE Money In The Bank 2015 event which kicks off at 8 p.m. ET/5 p.m. PT from Nationwide Arena in Columbus, Ohio.

* R-Truth vs. King Barrett — Truth rolls Barrett up for the pin.

* Everyone stands and the bell is sounded 10 times in memory of Dusty Rhodes. His theme song is then played.

* Money In The Bank Ladder Match featuring Randy Orton, Neville, Kane, Dolph Ziggler, Kofi Kingston, Sheamus, Roman Reigns — Reigns is the only one left but before he can grab the briefcase Bray Wyatt appears from nowhere and lays him out with a Sister Abigail. This allows Sheamus to enter the ring and climb the ladder to take the briefcase. Neville tried to stop him but got thrown off the ladder.

* Nikki Bella (c) vs. Paige for Divas Championship — Paige wins after some twin magic but Brie reveals her identity, then Nikki returns to finish Paige with a Rack Attack. Nikki keeps her title.

* Ryback (c) vs. Big Show for Intercontinental Championship — Miz is ringside with guest commentary, but Ryback ends that quickly, telling Miz his face is annoying and throwing him over the announce table. A bit later Miz interferes and hit’s Big Show and Ryback in the head with a mic. Big Show declared winner via disqualification. Ryback keeps the title.

* Kevin Owens (NXT c) vs. John Cena (c) — Crowd loves this match. After several near pins from both guys Cena finishes Owens with an AA. Great match. Cena tries to encourage Owens after the match, shakes his hand, but Owens ambushes him and lays him out with a pop-up power bomb on the edge of the ring.

* Seth Rollins (c) vs. Dean Ambrose in a ladder match for WWE Heavyweight Title — Crowd likes it as verified by their “this is awesome” chant. Both guys took a battering. Both climbed the ladder and grabbed the belt at the same time, they fell and as they landed Rollins was the only one to hold on and thus declared the winner.

THANKS FOR READING FOLKS, GOODNIGHT!