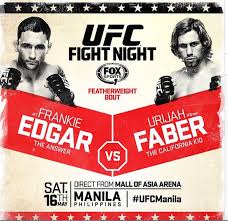 Stick with us here at PMN for live results.

Round 1 – Barnatt comes out flashing a jab. Looks light on his feet. Barnatt scores with an uppercut. Munoz ducks into a knee but still is able to score the takedown. He stands up to try to adjust position and Barnatt pops up, Munoz tries for another takedown, pushing Barnatt to the cage. Munoz scores with punches and then gets the takedown. Barnatt gets to his feet but Munoz stays on him in the clinch. He drags Barnatt back down and lands some of that Donkey Kong ground and pound that he became famous for. He postures up with another big right but somehow Barnatt is able to survive and get to his feet. Amazing. He took some BIG shots. Barnatt trips Munoz but Munoz gets the advantage as they get back up. 40 secs. to go in the round. Overhand right from Munoz lands. He clinches up where they stay until the round ends. 10-9 Munoz.

Round 3 – Overhand right, and another from Munoz. He shoots for a single. Munoz’s lack of combinations and submissions in my opinion were the biggest holes in his game. But right now he’s going off with several big punches and looking for that takedown. Ground and pound, wrestling and power punches were some of Munoz’s biggest weapons throughout his career. He just landed a big one two combo and overhand right. Knee to the body from Barnatt. Munoz shoots for the single and gets Barnatt down again. But can’t keep him there. Barnatt’s up but Munoz puts him down again. He stands and dives in with a big right hand that scores and the crowd goes nuts. He ends it on top and the whole arena is on their feet. 10-9 Munoz. Let me just say it’s GREAT to see Munoz go out on such a big victory in his homeland. It happens so rarely in MMA that one goes out on top. The question is will he be able to stay retired with such a high feeling lingering from his last performance. That will be hard. … Aside from all that, this was an amazing fight, made even more special from the circumstances surrounding it.

Munoz gives a very emotional heartfelt retirement speech after the match and left his gloves laying in the Octagon. #Powerful

Round 1 – Clinch, uppercut on the break from Edgar. Faber with a left. Franke backs him to the cage with punches, then lands a solid spinning back kick to the body. Leg kick from Edgar. Overhand right from Faber. Edgar goes for the takedown, Faber warned for grabbing the fence like four times or more. Faber defends and they move back to center. They trade leg kicks. Nice quick right from Edgar. He goes for a single, stuffed. 10-9 Edgar.