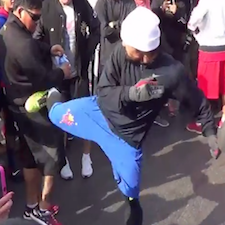 As Manny Pacquiao warms up for his daily run in preparation for his upcoming fight with Floyd Mayweather he stretches and dances around to loosen up. In this new video captured by EsNews (“Elie Seckbach reporting”) we can witness the 36-year-old Filipino boxing legend also showing some knowledge of kicking. Watch as Pac-Man first does some Bruce Lee impressions with his footwork and side kicks at a couple of his teammates, then goes deep with an oblique kick which has been made popular in MMA circles by UFC light heavyweight champ Jon Jones.

Pacquiao’s speed and footwork are impressive to say the least. Look at those freakin calf muscles. Notice how quick he is on the balls of his feet. That man can generate a lot of power my friend. We already know he’s friends with Ronda Rousey and owns a portion of Asia’s leading MMA promotion, ONE (formerly ONE FC). Now it looks as though Pac-Man has at least been experimenting with his kicking game. What else could he be working on? Grappling too, perhaps? He’s getting pretty long in the tooth to make a real run at MMA, but why not take a one-off fight in ONE just to test the waters? It would no doubt be epic.

First things first. May 2nd is the date. Mayweather is the fight. Where will you be watching?