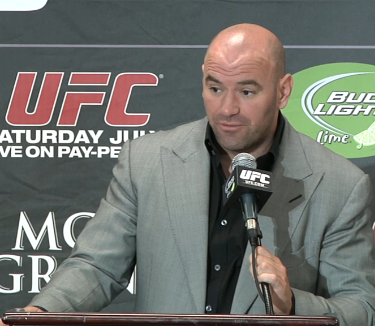 The promotion is expected to address the recent rash of positive PED (performance enhancing drugs) tests among its fighters and how it plans to deal with the issue moving forward. Will they institute a new stricter drug-testing program? Stiffer penalties for those who fail drug tests? Stay tuned.

Interestingly enough, there’s no mention of this event on the UFC.com homepage at the moment, although UFC.tv has a stream scheduled.

PMN will provide live updates from the proceedings.

I’m actually pleasantly surprised. This is what is needed to clean up the sport. It’s going to be very expensive for the UFC, but in the long run it will pay off, not just for the company but for MMA as a whole. If anyone can pull this off, it is the UFC. They took an outlawed fringe sport and helped it get regulated across the U.S. and world. If MMA is to thrive and grow, this is a necessary growing pain. How many more superstars are going to fall in the process though?

And could these changes usher in the return of GSP?