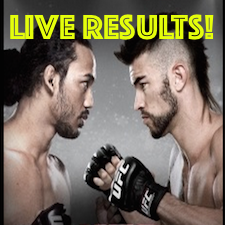 PMN will provide live results of all the fights and round by round updates for the main and co-main event. Got a minute, check out our staff predictions.

Round 1 – Holloway lands a big body kick, again. Nice leg kick from Miller. Left, and a right from Holloway. Knees to the body from the clinch from Holloway. Miller ties Holloway’s leg up in a submission attempt at the end of the round. 10-9 Holloway.

Round 2 – Nice leg kick from Miller. Goes high with the next one and skims Holloway’s scalp. Another leg kick. Holloway trying to play the counter game. Miller dives for a leg but Holloway escapes. Spinning backfist and a right hand from Holloway. An accidental head butt from Holloway cuts Miller and he drops to one knee. After a brief time out, Miller is pressing. High kick from Holloway. Leg kick Miller. Nice hard body kick from Miller. Miller complains of a second head butt. Holloway takes him down before the bell. Corner tells him to forget about the headbutt. Ref warns Holloway between rounds. 10-9 Holloway.

Round 3 – Holloway lands some nice punch combos and Miller slips to the ground for a moment. Holloway unleashing some big punches during the next exchange.Miller still moving forward though and eats a big counter right that stuns him. Holloway presses him to the cage and targets the cut over his eye with elbows and punches. Miller fires back and shoots for a leg with just over a minute left in the fight. Miller pulls guard but Holloway escapes. Holloway looking for the big KO as it goes back to the feet, throwing some mean spinning kicks and punches. Miller also looking for a big finish. Good fight. 10-9 for Holloway. 30-27 for the fight.

Round 1 – Bendo throwing leg kicks to start, circling on the outside. Throwing a jab. Thatch trying to gauge his distance. Thatch with a body shot. They trade leg kicks. Nice body shot from Bendo. Nice body kick from Thatch, and a right hand. A front kick stops Thatch’s forward momentum and causes him to fall for a moment. Body shot and a kick to the body from Bendo. Thatch being very aggressive and scores with a head kick. Bendo eats it. Close round. I give the edge to Bendo.

Round 3 – Head kick scores for Ben and a right hook. Big body shot from Ben. High kick and a right from Thatch. Nice head movement from Thatch moving in. Nice knee to the body from Thatch. Ben shoots, Thatch defends but eventually gets put down by the smaller guy. Ben takes his back with both hooks in. Ben goes for an armbar in the finals seconds but Thatch escapes to his feet. 10-9 for Benson.

Round 4 – Nice body shot from Ben. Thatch looks for knees in the clinch. Thatch lands a big knee on Ben’s forehead in the clinch. Big one two from Thatch. Leg kick from Ben. Nice punches and a perfectly timed takedown from Benson. That was beautiful I must say. Ben passes to side mount. Thatch gives up his back with 2 minutes to go. Thatch scrambles, then turtles up. Benson opens up Thatch’s nose, takes Thatch’s back and locks in the fight ending rear naked choke. Thatch taps out.

Benson calls out Rory MacDonald afterward, saying he heard he needs an opponent.

By the way, I was the only one of the PMN staff to predict Benson would win — however, I did expect a decision.