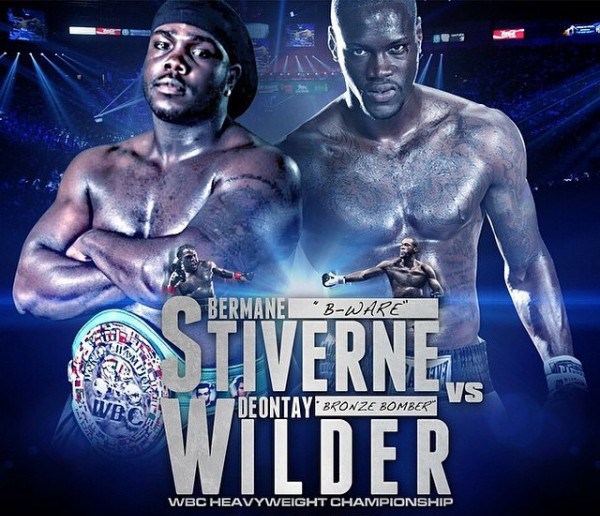 Heavyweight action tonight in Las Vegas when champ Bermane Stiverne defends his WBO world title against rising star Deontay Wilder. The event will air live on Showtime starting at 10 p.m. ET. The challenger comes in with a highly impressive undefeated record. Deontay Wilder is a winner in all 32 professional outings. He also holds 32 knockouts. Wilder won a Bronze medal in the 2008 Olympics in Beijing. Despite his success many have questioned the skill because they felt he had not been tested by tough opponents. His fight tonight will easily be the toughest of the 29 year old’s career. The champ will be making his first title defense since defeating Chris Arreola back in May of 2014. Stiverne is the first boxing champ to come out of Hati.

Stay close to ProMMANow.com for live round by round results.

All credit to @ZProphet_MMA for the GIFS.

Round 1: Wilder throws first. He trys his left hand early but seems to be just checking distance. Left hand to the chest from the champ Stiverne. Stiverne jabs to the body. Right hand over the top by Wilder. Lots of feeling out early. Wilder connects with a combo. Left hook from Stiverne. Wilder gets busy as the round ends. Gotta go 10-9 Wilder .

Round 2: Nice jab from Wilder. Wilder looks calm and is picking his shots. Stiverne has been a bit more loose with his shots. Uppercut from Wilder. Left hand looking good so far from the challenger. They trade right hands. Left hook connects from Wilder. Stiverne with a left hook. Right hook from Wilder. Another flurry from Wilder at the end. Both guys drop. Wow.

Round 5: Wilder back to the jab to lead things off. Stiverne goes to the body. Some chatter back and forth between the two. Stiverne lands a right hand. Jab from Wilder. Stiverne slips a couple jabs. Combo to the body by the champ. Wilder starts to unload on Stiverne. Right hand from the champ. Wilder takes the first round 5 of his career. 49-46 Wilder.

Round 8: Pace slows way down. Trading jabs early. These left hands from Wilder are adding up. Body shot from Stiverne. A solid combination lands from the champ. Right cross connects from Wilder. Stiverne to the body and then lands an uppercut. The champ takes it. 77-75 after 8.

Round 10: Wilder can always count on the left hand to connect. He starts the round off once again with it. Wilder throwing with volume. Stiverne puts Wilder on the ropes. Left hook from Wilder. Wilder is playing with Stiverne landing several left hands as he bobs around. Right hand to the body from the champ. Uppercut from the challenger. The champ goes to the body and follows it up with an uppercut. Close round. I’ll go with Wilder. 97-93. Wilder pulling away.

Round 11: Body shot from Stiverne. Body shots aren’t gonna win this fight though. He needs a finish. Wilder connects with a good jab. Left hand from Stiverne. Snapping right hand from Wilder. Crowd seems to be getting restless. Stiverne goes back to the body and lands a right. Wilder is just throwing punches for the fun of it, nothing behind them. He takes the round though. 107-102.  One more to go.

Round 12:The champ opens with a left. Wilder obliges with one of his own. Body shot lands from Stiverne. Wilder just keeping on the move. Stiverne is worn out. Wilder has Stiverne against the ropes but its slow going. Stiverne gets a right hand off. Wilder does his job and keeps it grinding and finishes with a jab. I believe we have a new champ. 117-111.