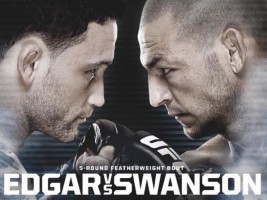 UFC Fight Night 57 will feature No. 3 ranked featherweight Frankie Edgar taking on No. 2 ranked Cub Swanson in the main event. The winner will likely find themselves getting a shot at the 145 pound title against the winner of Jose Aldo and Chad Mendes, who will hash things out later this month.

UFC Fight Night 57 will be held at the Frank Erwin Center in Austin, Texas on Saturday, Nov. 22, and will broadcast live on FOX Sports 1, with early prelims streaming live on UFC Fight Pass.

Tickets for UFC Fight Night 57 in Austin will go on sale Friday, Oct. 17, at www.texasboxoffice.com. UFC Fight Club members can get their tickets on Wednesday, Oct. 15, and UFC newsletter subscribers (subscribe on UFC.com) can purchase tickets on Thursday, Oct. 16.

In addition to what is sure to be an action-packed main event, the UFC Fight Night: Austin card will include the UFC debut of undefeated heavyweight Josh “Cuddly Bear” Copeland as he takes on Team Jackson-Winkeljohn’s Ruslan Magomedov.