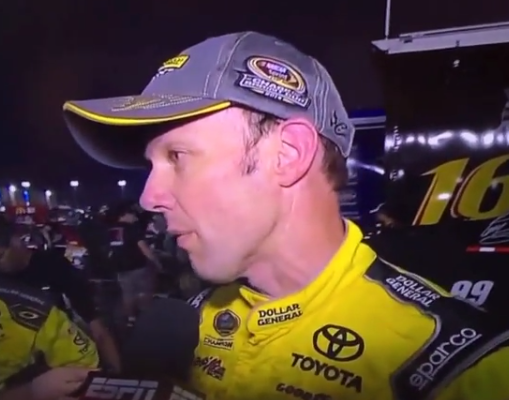 Watch as Matt Kenseth attacks Brad Keselowski from behind following their race Saturday night at Charlotte Motor Speedway. Kenseth was unhappy with Keselowski for what he perceived as reckless behavior on the track. Denny Hamilin also tried to get at Keselowski but was restrained.

Afterward, Kenseth commented on what provoked him:

“It was really the safety. He (Keselowski) was doing something with Hamlin, I had my seatbelt off, my (head-and-neck restraint) off and he clobbers me. The race is over, come back to pit road. If you want to talk about it like a man, go do that. But if you want to wreck somebody on the racetrack with people standing around, that’s just inexcusable. There’s no excuse for that. That’s a champion and he’s supposed to know better than that.”

“I figured if we’re going to play car wars under yellow and after the race, I’ll join, too. Those guys can dish it out, but they can’t take it. I gave it back to them and now they want to fight.”

Kevin Harvick won on Saturday and advances into the third round of the Chase for the Sprint Cup championship.

See what led to the melee, as well as an interview with Keselowski below: