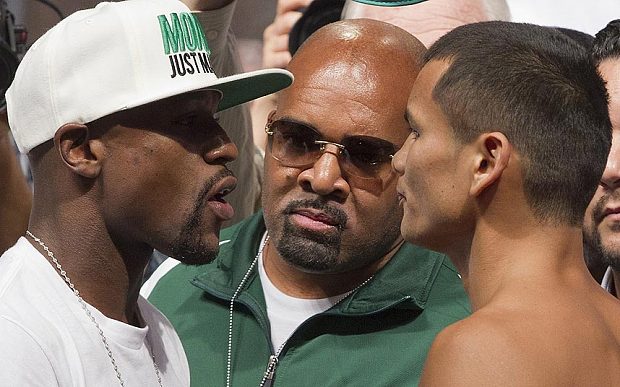 The rematch is upon us! Floyd Mayweather Jr. is back in action tonight against Marcos Maidana in Las Vegas. Some say Maidana pushed Mayweather harder than any other fighter in the history of his career. They will meet again tonight. Mayweather (46-0) is putting his WBC and WBA welterweight (147 pound) titles on the line as well as the WBC junior middleweight title against the 35-4 Maidana.  Before the main event we will be treated to three undercard bouts featuring a lightweight championship as well as a super bantamweight title fight. We will bring the under card results and a live round by round blog of the main event.

“Maybe he has to fight dirty but it’s a fight so who cares?” -Mike Tyson #MayweatherMaidana2 — FrontRowBrian (@FrontRowBrian) September 14, 2014

Round 1: Here we go. Both men going to the body early. Feeling each other out. Floyd sticks out the left hand. Goes in for the body. Nothing really landing for either. Jab from Mayweather. Right hand from Maidana. Floyd slips? Back at it. Floyd jabs. Maidana puts Mayweather in the ropes. Three minutes in. Floyd 10-9.

Round 3: Mayweather dances on the outside again to start the round. Maidana off the mark with a couple right hands. Floyd ties his up to stop the attack. Mayweather with a left hand to counter Maidana. Maidana with a right hand to the chest of Mayweather. Nice punch from Mayweather. Mayweather going to the body. Floyd with a stiff left hand. Clean right hand from Floyd. Ref tells them to work out of the tie up. Left hand bounces Maidana’s head back. Jab from Maidana. Maidana lands a big shot at the bell. Floyd takes this one though. 30-27 after 3.

Round 8: Maidana seems frustrated to start the round. A couple of tie ups. Floyd against the ropes and is getting the best of Maidana. Overhand right off the mark from Maidana. Mayweather takes one to the ribs. Maidana hugging alot this round. Right hand from Maidana. Maywather peppers Maidana from the corner. Right hand from Maidana. Best punch of the round so far. Uppercut from Mayweather. What the hell? Did Maidana bite Mayweather. Referee says he doesn’t see it. After some confusion we are back to the action. Not much happens as the round ends. .

Round 9: Bouncing around, Mayweather dodging some shots. Mayweather finds himself against the ropes but they are tied up and pulled apart. Left hand grazes Mayweather. Where’s the flute player from the national anthem when you need something to talk about. Floyd warned about throwing elbows. Left hand off the mark from Maidana. Referee has earned his check tonight, breaking them up every 10 seconds it seems. Floyd against the ropes and comes out with a big jab. Damn, they are hugging it out big time. Big left hook from Floyd as the round ends. Maidana goes to the wrong corner. Mayweather takes it. 88-84 with a couple to go.

Round 10:  Referee tells Floyd to keep it clean. Maidana trying to come out strong but Floyd dancing around. Floyd looks like he has more energy. Oh no, Floyd gets knocked to the ground. Referee stops the action and takes a point from Maidana. It’s getting out of Maidana’s reach at this point. Floyd takes the round.

Round 11: Maidana is in make or break territory. Speaking of break, they are tying up every few seconds. Low blow from Floyd. Stall in the action. I think the crowd and everyone is losing interest. I find myself watching the fight more and typing less.

Round 12: Jimmy Lennon Jr. getting the crowd hyped. Referee tells them to keep it clean and good luck. Remember when Floyd said he got bitten? That seemed like yesterday. Crowd booing. Floyd not trying to get anything going. He’s cruising. Reminds me of the episode of The Simpsons when Homer becomes a pro boxer. I think Maidana won the round but is gonna lose big!