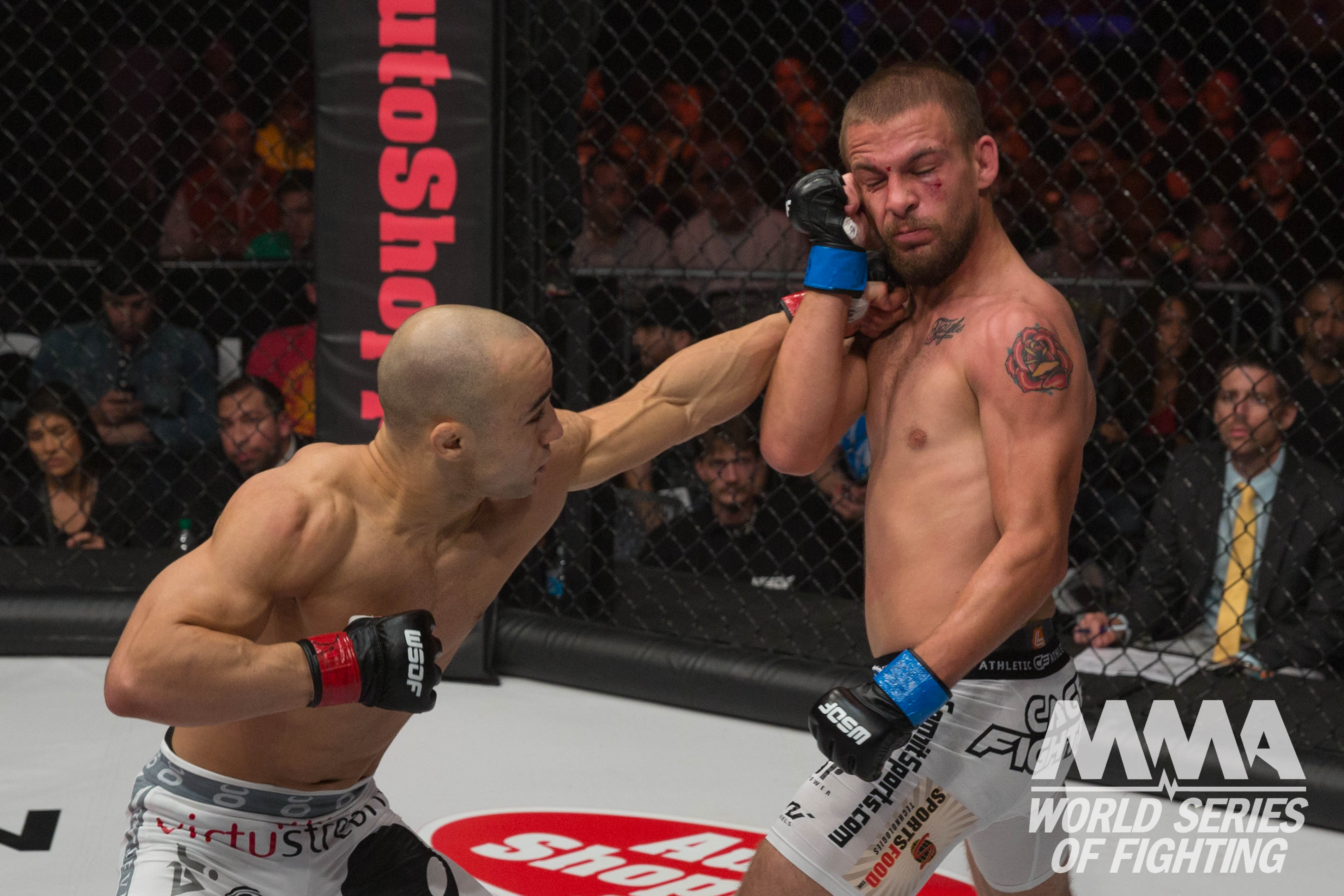 Reigning bantamweight (135 pounds) champion Marlon Moraes (14-4-1) of Palm Beach Gardens, Fla. continued his tear, notching his eighth consecutive victory with a second round submission (rear-naked choke) of fellow superstar Cody Bollinger (16-3-1) of Rancho Cucamonga, Calif. in the 147-pound catchweight main event and non-title affair at the World Series of Fighting Mixed Martial Arts (MMA) event at Sands Bethlehem Event Center in Bethlehem, Pa. on Saturday, Sept. 13, live on NBC Sports Network (NBCSN). The 26-year-old Moraes nearly finished Bollinger in the first round with a storm of punches after sending Bollinger to the canvas.  Bollinger made it back to his feet, only to be tagged with a Moraes head kick as the round came to a close. In the outset of the second frame, Moraes began unloading kicks and, then dropped Bollinger with a shot to the temple.  Moraes followed his opponent to the canvas and slapped on a rear-naked choke, forcing Bollinger to tap out at the 1:35 mark of the round. In the lightweight (155 pounds) co-main event, Ozzy Dugulubgov (6-2) of Clifton, N.J. scored a stunning third round KO (punch) on Keon “The Black Assassin” Caldwell (10-3) of Moultrie, Ga.  Following a competitive first round of battle, Dugulubgov began to open up, securing two takedowns and executing a throw on Caldwell.  In the third stanza, Dugulubgov unleashed a spinning back kick to Caldwell’s body, then suddenly exploded with a punch that immediately knocked Caldwell out and brought about a stoppage at the 1:38 mark of the round. In another bantamweight tilt, Timur “Lucky” Valiev (8-1) of Albuquerque, N.M. notched his eighth consecutive win, a dominant performance that led to a unanimous decision over Isaiah “The Beast” Chapman (6-2) of Akron, O.H. In a lightweight attraction that served as the opening fight on the four-bout NBCSN card, a game Frankie Perez (9-1) of Howell, N.J. made his debut for World Series of Fighting in spectacular fashion, winning all three rounds on all three judges’ scorecards against fellow Brazilian Jiu-Jitsu brown belt Tom Marcellino (7-3) of Amsterdam, N.Y. to walk away with a unanimous decision victory. Complete World Series of Fighting 13: “Moraes vs. Bollinger” Results: Main Card: Marlon Moraes def. Cody Bollinger via submission (rear-naked choke)  – Round 2, 1:35Ozzy Dugulubgov def. Keon Caldwell via KO (punch) – Round 3, 1:38Timur Valiev def. Isaiah Chapman via unanimous decision (30-27, 30-27, 30-26)Frankie Perez def. Tom Marcellino via unanimous decision (30-27, 30-27, 30-27) Preliminary Card: Sidemar Honorio def. Matthew Lozano via TKO (arm injury) – Round 3, :28Matt Secor def. Brett Shoenfelt via submission (rear-naked choke) – Round 2, 4:38Katlyn Chookagian def. Brigitte Narcise via KO (knee) – Round 3, :38Nick Browne def. Sidney Outlaw via KO (punches) – Round 1, :25Tenyeh DIxon def. Emmanuel Walo via split decision (29-28, 28-29, 29-28)Luciano Cristovam def. Francisco Isata via unanimous decision (30-27, 30-27, 30-27)