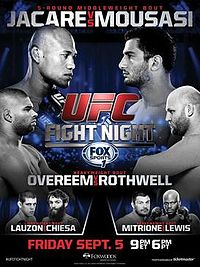 The UFC Fight Night 50 event is slated to take place on Friday, September 5, at the Foxwoods Resort Casino in Connecticut. The event will be headlined by the middleweight rematch between Ronaldo “Jacare” Souza and Gegard Mousasi. The two fighters fought in the DREAM promotion in 2008, with Mousasi knocking out Souza with an upkick in the first round.

The co-main event will feature a heavyweight scrap between Alistair Overeem and Ben Rothwell.