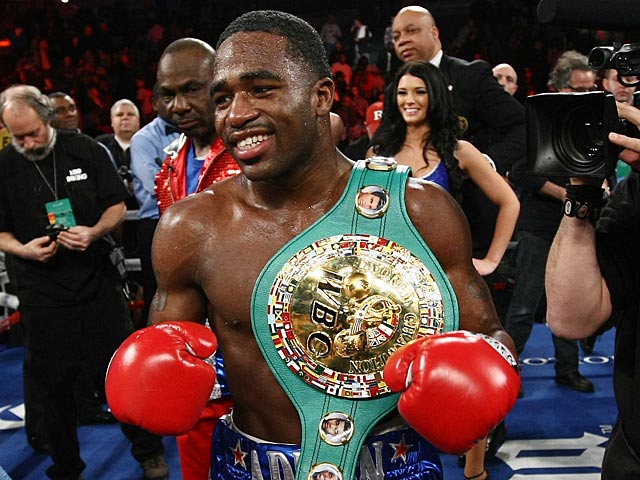 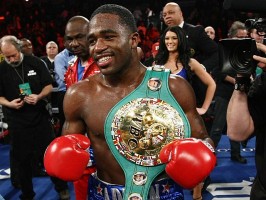 Before the trio of exciting fights gets underway Newark’s pride Michael “The Artist” Perez will battle for the
WBA Fedelatin Super Lightweight Title against South Carolina’s Jared “The Quiet Storm” Robinson in a 10-
round bout on SHOWTIME EXTREME® (live at 7 p.m. ET/PT, delayed on the West Coast). In the opening
bout, Rau’shee Wareen will face Jose Luis Araiza in a 10-round bantamweight match.

On the non-televised portion of the card, three-time United States Olympian Terrell Gausha will face an
opponent to be named in an middleweight bout.

Two-time welterweight world champion and former Haitian Olympian Andre Berto (28-3, 22 KOs) is
consistently one of boxing’s most exciting fighters. Berto, coming off a year-long layoff and recouping from
shoulder surgery, says he intends to remind fight fans of just that. Fully healed and coming off his thrilling 2013
bout with Jesus Soto Karass, the Winter Haven, Fla., native will celebrate his 31st birthday a day early when
he performs for fight fans in Cincinnati against Upsher.

Philadelphia’s Steve Upsher (24-3-1, 6 KOs) has been a respected member of the east coast fight community
for years and is known for his ring knowledge, boxing skill and heart. A pro since 2003, the 29-year-old came
up the hard way on the Philly fight circuit, and while he’s looking to bounce back from losses to Eddie Gomez
and Luis Collazo, he has all the tools to give Berto a rough night and spoil his comeback attempt.

The 24-year-old Michael Perez (20-1-2, 10 KOs) is on an impressive hot streak, as he’s gone 5-0-1 in his last
six fights, a stretch that includes back-to-back wins over Miguel Zuniga and Jorge Romero in his most recent
bouts. The 31-year-old Jared Robinson (15-1, 7 KOs) has been patient in his rise through the division, and
this Sept. 6 bout is the one he’s been waiting for, as he hopes to shine on national television.
Rau’shee Warren (11-0, 3 KOs) has been a steady performer throughout his pro career, and on Sept. 6 he
gets the opportunity to fight in his hometown of Cincinnati for the first time as a pro when he takes on Tecate
Baja California, Mexico’s Jose Luis “Tapitas” Araiza (34-8-1, 25 KOs) in a 10-round bantamweight matchup.
The 27-year-old Warren has dazzled against his opponents, barely losing a round in the process. The veteran
Araiza, who has won two straight, will be Warren’s most experienced opponent to date.

Two of Warren’s 2012 Olympic teammates, Cleveland middleweight Terrell Gausha (11-0, 6 KOs) and New
York lightweight Jamel Herring (8-0, 5 KOs), will also be back in action at the U.S. Bank Arena when they face
opponents to be announced in eight-round bouts.

In other non-televised bouts, making the short trip from Toledo will be lightweight up-and-comer Robert Easter
Jr. (10-0, 8 KOs), a hard-hitting talent who will take on a foe to be determined in a 10-round bout. Other Ohio
favorites in action will be lightweight Raynell Williams (4-0, 3 KOs) of Cleveland and super welterweight
Jamontay Clark (2-0, 2 KOs) of Cincinnati. Williams will face an opponent to be determined and Clark faces
Bryan, Ohio’s Matthew Montalvo (0-0-1). Both bouts are scheduled for four rounds, as is a lightweight
matchup between Washington, D.C.’s Lamont Roach (2-0, 1 KO) and Las Vegas’ Rocco Espinoza (4-8).

ABOUT “BRONER VS. TAYLOR”
Broner vs. Taylor, a 12-round super lightweight bout, will be held on Saturday, Sept. 6 and is promoted by
Golden Boy Promotions and R&R Promotions in association with Star Boxing. In the co-main event, Lucas
Matthysse faces Roberto Ortiz in a 10-round super lightweight bout promoted by Golden Boy Promotions in
association with Arano Boxing and Pepe Gomez’s Cancun Boxing. In the televised opener, former welterweight
world champion Andre Berto will face Philadelphia’s Steve Upsher in a 10-round welterweight match-up. The
event is sponsored by Corona and AT&T and will take place at U.S. Bank Arena in Cincinnati, Ohio live on
SHOWTIME immediately following “ALL ACCESS: Mayweather vs. Maidana 2” Episode 2 premiere at 9 p.m.
ET/ 6 p.m. PT. The event will also be available in Spanish via secondary audio programming (SAP).
Preliminary bouts in SHOWTIME EXTREME will air at 7 p.m. ET/PT, delayed on the West Coast.
TICKETS: Tickets, priced at $128, $78, $53 and $28, are on sale now and are available
by calling Ticketmaster at 800-745-3000 or online at www.ticketmaster.com. Tickets will also be available at
the U.S. Bank Arena Box Office.