Dana White apologizes to judge for removing him from UFC Macao event; looks forward to working with him again 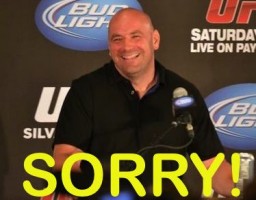 It’s a good thing when someone can acknowledge they were wrong and admit it in front of their millions of fans. It’s something Adam Sandler should have done after his last movie, Blended. That sh*t sucked. It’s currently available On Demand on Direct TV, don’t rent that sh*t. I’m warning you now.

Now, Dana White and the UFC are apologizing for removing one of the judges at UFC Fight Night 48 in Macao over the weekend after White disagreed with his scoring of the first two fights of the night.

After an internal review, the UFC organization announced today that a breach of its independent regulatory protocol occurred on Saturday night during UFC FIGHT NIGHT MACAO.

After the second fight of the night, UFC President Dana White requested that Howard Hughes, one of the event’s five assigned judges, be removed from working any further bouts. Pursuant to UFC’s protocol, neither White nor any other UFC executive possesses such authority. Nevertheless, protocol was breached and Hughes did not work further bouts on Saturday night.

The UFC organization has always been in support of government regulation and oversight. Additionally, the UFC has established a protocol when required to self-regulate events due to the lack of an official athletic commission, federation or other regulatory body. In those instances where UFC holds events in locations without a regulatory body, the UFC’s protocol dictates that the organization’s internal regulators will handle all commission functions independently and without interference by company executives or employees.

The UFC remains committed to maintaining the strictest regulatory environment for competition and vows that no similar breach of protocol will happen again.

Both White and the UFC apologize to Mr. Hughes for calling his professional judgment into question. Hughes has judged more than 25 UFC fight cards and the UFC looks forward to him working on its events again in the future.

White took a lot of heat for removing judge Hughes. Even from two of their largest supporters, Kevin Iole of Yahoo, and MMA Junkie. Would the UFC have apologized had it not garnered the attention it did? It doesn’t really matter. The media did their job and took MMA’s premiere organization to task. If the UFC is supposed to be the standard for the industry, then they need to act like it, and issuing a public apology and saying they look forward to working with judge Hughes again is the right thing to do.

White even issued a more personal apology to Hughes at a scrum at today’s UFC 180 press conference in Mexico (transcription via MMA Junkie):

“It’s no secret how fired up I get when there’s bad judging, but I have to apologize to judge Hughes. I did get some misinformation. He didn’t score the second fight 30-27 for the fighter from China. And yeah, I got a little crazy, and I overstepped my bounds. It’s not the first time, and hopefully that’s the last time I’ll ever do that. I was wrong.”