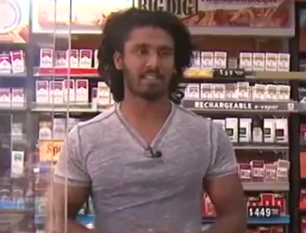 Sri Lankan MMA fighter and Super Fight League veteran Mayura Dissanayake was on the job at a Fuel Depot in Houston earlier this month when a co-worker was returning from the bank with a bag of money. Dissanayake was behind the counter when he noticed two men exit an SUV and attack his co-worker in an attempt to steal the cash. With over a decade of experience in mixed martial arts training, Dissanayake rushed to his co-worker’s aid, soccer-kicking the first guy in the face, then punching another attacker who was trying to flee.

“The first guy I saw, I just kicked him in the face. Then I punched the other guy. … We learn how to punch, how to kick and all that stuff you can use in the streets. … I just kicked him until he lays down on the floor. Until he stopped moving cause I wasn’t sure if he had a knife or a gun so I wanted him to stop moving.”

Police arrested one of the attackers, while his accomplice and the driver are still at large. I bet they don’t try that again, at least at that store.