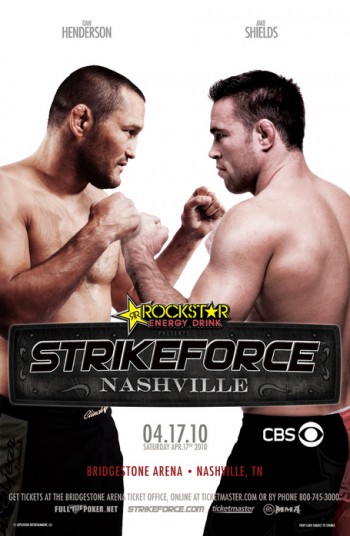 In April 2010, Strikeforce invaded the Music City for their huge Strikeforce: Nashville show that aired live on CBS around the country. The promotion rolled out all their stars and three title fights for the big show that aired in prime time. The main event featured the red hot Dan Henderson, who was coming off of a highlight reel knockout of Michael Bisping, against Strikeforce Middleweight Champion Jake Shields.

Henderson walked into Strikeforce riding a three-fight win streak in the UFC. With a highlight reel knockout of cocky British fighter Michael Bisping on his resume, the former UFC star was the most popular and marketable guy on the Strikeforce roster. By the time he made it to Tennessee Henderson wouldn’t have to get on SingleNashville.com to find a girlfriend for the weekend. Many thought he would easily win the middleweight title and become the biggest star in Strikeforce.

Too bad Jake Shields never got the memo. Shields, a huge underdog in the fight, weathered the storm early but held on for four more rounds to pull the upset of ‘Hendo’. Henderson landed a big right in the first round that clearly rocked Shields, but after he recovered, the last four rounds were never in doubt as the champ retained his belt.

Shields also parlayed the victory into a new deal with the UFC as soon as his contract expired. Shields stole the spotlight with the high profile win on network TV then jumped to Strikeforce’s biggest competitor. Worst of all, Jason ‘Mayhem’ Miller, who had competed earlier that night, walked into the cage after the fight to ask Shields for a title shot. It was a pretty inopportune time as Gilbert Melendez, Nick and Nate Diaz tried to teach Miller a lesson for being disrespectful. Pushing and shoving ensued and with that CBS never carried another Strikeforce event. The network may not have liked it but every fan that hadn’t left was going crazy.

The co-main event of the show featured Strikeforce lightweight champ Gilbert Melendez vs. DREAM lightweight champion Shinya Aoki. The fight got off to a slow start as Aoki inadvertently poked “El Nino” in the eye but once it restarted Melendez smothered Aoki with superior wrestling and the fight really was never in doubt.

The most intriguing matchup at Strikeforce: Nashville was Gegard Mousasi vs. “King Mo” Lawal. Mousasi was the Strikeforce light heavyweight champion and Lawal was a prospect with legitimate amateur wrestling credentials from his time at Oklahoma State. Mousasi had fought all over the world and had the clear advantage in experience but that night in the Music City it was Mo’s wrestling that helped win a unanimous decision and the Strikeforce light heavyweight title.

On the undercard that night in bouts that didn’t air on television “Mayhem” Miller made quick work of journeyman Tim Stout, and future UFC fighters Dustin Ortiz and Ovince St. Preux both won via first round finishes.

It was arguably the biggest night for MMA in Nashville but due to the actions of Jason Miller, Gilbert Melendez, and the Diaz brothers it marked the beginning of the end for Strikeforce.