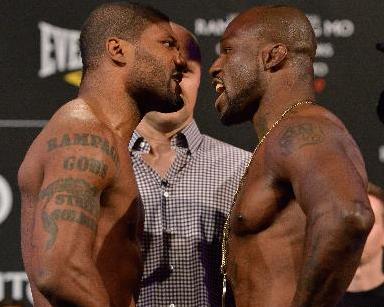 The memorable Bellator 120 Pay-Per-View event that took place May 17th in Memphis will air free on Spike TV on Friday, July 18 at 9 p.m. ET/PT. Bellator MMA made the announcement on Wednesday.

The event was headlined with a light heavyweight bad blood match between Quinton “Rampage” Jackson and Muhammed “King Mo” Lawal. The bout went a full three rounds with Mo dictating much of the fight with his superior wrestling, but the judges controversially ruled in Rampage’s favor, giving him the decision victory.

In the co-main event, ex-UFC superstar Tito Ortiz shocked everyone by submitting Bellator’s middleweight champion, Alexander Shlemenko, in the first round. Shlemenko had moved up to the 205-pound division for the fight, but due to Ortiz’s lackluster performances over the last few years, literally no one gave “The People’s Champ” a chance to win.

There was also another controversial decision on the card with late replacement Will Brooks defeating former lightweight champ Michael Chandler. Also, heavyweights Alexander Volkov and Blagoi Ivanov entertained the fans, and Britain’s Michael Page showed everyone why he’s an up-and-comer to keep an eye on.

We’re excited to see what the future brings for Bellator as former Strikeforce frontman Scott Coker has taken over at the helm following the exit of Bellator Founder and CEO Bjorn Rebney.

You can see ProMMAnow.com’s live coverage and photos from Bellator 120, then remember, on July 18th, you can watch the free replay on Spike TV.
[ads1]
[ads2]