With so many UFC events these days, the cards are bound to be watered down, but we’re going to tell you about four fights this weekend you’ll want to pay attention to. 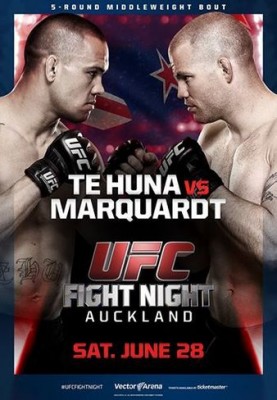 This heavyweight co-headliner features hulking knockout artist Soa “The Hulk” Palelei looking for his twelfth straight knockout victory, and his fourth straight inside the UFC Octagon. He’s going to want to keep this one on the feet though as he takes on three-time NCAA Division I All-American wrestler Jared Rosholt, who has won back-to-back decisions since making his UFC debut last year. Palelei has had some trouble with wrestlers in the past, but if he can prove he can deal with the high level wrestling of Rosholt, we can start to get a better look if he’s ready for the upper echelons of the UFC heavyweight division. Palelei’s highest profile UFC win to date was his KO win over Pat Barry back in December. We know “The Hulk” can smash, but we’ve yet to see if his wrestling has improved enough to handle an elite grappler like Rosholt.

Remember when Nate Marquardt challenged Anderson Silva for the title back in 2007? He lost that fight but had a decent run at 185 pounds before dropping down to the 170 pound division in 2012. At welterweight Marquardt went 1-3 and has lost both his bouts since returning to the UFC last year. Now he will move back up to middleweight and give it one more go. It’s a little surprising they’re using he and Te Huna for this main event since they’re both on losing streaks. However, this is definitely one of the fights to watch on Saturday because either one of them could end it with one shot. Marquardt is moving up in weight, while Te Huna is dropping down from 205, where he won four straight before getting stopped by Glover Teixeira and Mauricio “Shogun” Rua last year. 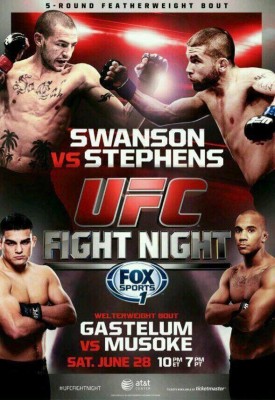 While 28-year-old Swede Nicholas Musoke has defeated Alessio Sakara and Viscardi Andrade since making his UFC debut last October, the main reason you want to watch this welterweight co-main event showdown is because of unbeaten TUF 17 winner Kelvin Gastelum. Gastelum has taken out the likes of Uriah Hall, Brian Melancon, and most recently, Rick Story. While Musoke is not necessarily a step up in competition, he’s a legit opponent that will give us a better idea of Gastelum’s progression. At only 22-years-old Gastelum has a ton of potential and he’s one of the UFC’s up-and-coming 170-pounders you want to keep your eye on.

If you were only going to watch one fight this weekend, the featherweight main event between Cub Swanson and Jeremy Stephens should be it. Swanson has been on a hell of a tear and has never looked better, having won his last five fights in a row, including stoppages of George Roop, Ross Pearson, Charles Oliveira and Dennis Siver. It seems the no. 4 ranked Swanson is finally putting it all together and could be very close to a title shot with an impressive win on Saturday. Stephens has won three straight since dropping to featherweight last year, including decisions over Estevan Payan and Darren Elkins, and a head kick KO over Rony Jason. Both Swanson and Stephens can finish the fight at any time, and there’s a lot on the line for both guys here.

Be sure to join us here at ProMMAnow.com on Saturday for live coverage of all the action.
[ads1]
[ads2]