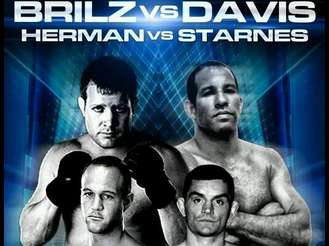 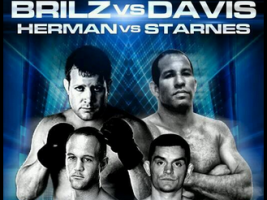 ProMMAnow.com will provide LIVE results of the card, with play-by-play commentary of the main card which will broadcast live on CBS Sports Network at 10 p.m. EST. The prelims are streaming live on CBSSports.com.

Round 1 – Robinson shoots, Santos sprawls and Robinson turtles up for a moment as Santos throws punches. Robinson rolls over to his back and has half guard as Santos works the ground and pound. Hammerfists from Santos. More ground and pound for the next few minutes as Santos completely controlling the action here. Not doing a ton of damage but, Santos is dominating the fight. Santos looks for an Americana. Robinson bridges and sweeps. Santos looks for the armbar, then scores a reversal right before the bell. PMN sees it 10-9 for Santos.

Round 2 – Robinson tries to shoot in, but once again ends up on his back early in the round. Nice couple elbows from Santos. He continues to control the action from on top in half guard, using elbows and body shots. Robinson gets a butterfly guard, then gets to his feet and is looking for a single. Santos defends and unloads some big right hands before Robinson turtles up and gets his back taken. Santos on Robinson’s back with a body triangle locked on. Robinson creates a scramble but ends up on his back again quickly. Santos goes back to the ground and pound assault from half guard. Robinson turtles up as Santos turns up the heat with punches and the ref stops it with under 10 seconds left in the round.

Round 1 – Touch gloves. Foster throws an overhand right and a punch combo but Smith shoots in and puts Foster on his back. Foster throws up his legs for a triangle, locks it in now as Smith stays patient. Foster lands a few elbows to the head for good measure. Foster turns it to an omoplata briefly, Smith pulls free and is now inside full guard from top. Smith working the body shots, keeping his head on Foster’s chest. He postures up with a couple punches, Foster looking for a kimura and sweeps Smith out of full mount. Foster lands an elbow and some nice punches, and a knee as Smith gets to his feet. He walks Smith down, Smith shoots in as Foster sprawls. Smith turtling up, goes for a single, trips Foster who is now on his back with Smith inside his full guard. Smith postures up but is unable to get anything off before the bell. PMN sees it 10-9 Foster.

Round 2 – Smith ducks a high kick, but eats a knee. Foster gets a takedown, Smith rolls over to his back and looking for the upkick. Foster dives in with a big right. Smith bleeding from his head. He gets to his feet but Foster drags him back down. Smith gets to his knees and gets on a single but Foster pushes him off. Smith turtles against the cage as Foster picks his punches. Smith back up, back to cage. Body kick from Foster. Smith seems hesitant. Throws a hook/straight combo but misses. Leg kick from Smith. Foster with a punch combo and a knee. Smith seems to land a low blow, ref doesn’t see it, so Smith follows up with punches. Foster turtles up and Smith jumps on his back. Foster escapes to his feet and gets a takedown. Smith turtles up now, front headlock from Foster. Smith is able to take top position in side mount. He postures up as Foster looks for a triangle. Smith free of it and landing some shots inside full guard. PMN sees it 10-9 Foster.

Round 3 – Right hand from Foster, gets Smith to the ground briefly, lands a knee as Smith gets up and puts Foster on his back, has top control in half guard. Smith moves to side mount. Smith now with a front headlock as Foster gets to his knees. Scramble and Smith back on top in side mount. Smith landing knees to the body/kidney section. Foster recovers half guard, now full guard. Smith postures up, still in guard. Smith moves to half guard. Foster looking for that kimura sweep again. Smith avoids it, maintains top control and staying busy enough. As Smith tries to pass, Foster gets a reversal and drops an elbow on Smith. Smith throws up his legs for an armbar, trying to pull it straight… you can hear Smith grunting. Time up. PMN sees this round 10-9, but the fight 29-28 for Foster.

Round 1 – Touch gloves. Jardine throwing some kicks. Nina with a left hand and a front left kick. Ninja takes a kick to the groin. Timeout is called. Touch gloves, here we go. Clinched against the cage, Ninja with underhooks throwing knees. Jardine tries to muscle a takedown but Ninja puts him back to the cage. Jardine turns him around, landing some knees. Ninja turns him around, then gets a takedown. Ninja on top in half guard. Ninja looking at a possible guillotine, but Jardine gives up his back. Ninja riding him with both hooks in as they roll over. Round ends with Roberts still on his back. PMN sees it 10-9 Roberts.

Round 2 – Left hook, straight right from Jardine, then a leg kick, body jab. Leg kick from Ninja, but eats a counter left. Head kick attempt from Jardine, but Ninja times a takedown and avoids the kick. Ninja on top in half guard, transitions to full mount. Jardine uses the fence to escape to his feet. Ninja looking for the takedown as Jardine escapes to the center. They square up. Leg kick from Ninja. Ninja catches a leg kick and puts Jardine on his back. Jardine tries to sweep, but Ninja is able to take his back with both hooks in now. Ninja looking for the choke as the 10 second buzzer sounds. He lets it go and lands a few shots before the bell. PMN has it 10-9 for Ninja.

Round 3 – Body kick and jab from Ninja. His chin is straight up though. Left hook from Jardine, then a right following a brief slip. Nice right from Jardine. Front kick. Right hook, right to the body. Ninja shoots in for the single, lifting the leg high, has to let it go as Jardine defends with his back to the cage. Ninja backs out. Jardine throwing heat. Nice right, spinning back kick from Jardine. Body shot, then a spinning back kick. Elbow on the break. Right to body, push kick. He backs Ninja to the cage and lands a nice left that forces Ninja to escape to the center. Head kick from Jardine scores. Ninja is able to get a takedown, and takes top control in half guard, moves to side mount. Ninja moves to full mount and is landing punches. Jardine gives up his back, Ninja locks in the choke, lets it go and lands a couple elbows before the bell. Ninja probably stole that round. PMN sees it 10-9 and 30-27 for Ninja.

Round 1 – Clinch, knee from Davis, he pushes Brilz to the cage. Clinch, couple knees from Brilz, Davis returns same. Brilz turns him around to the cage, then gets a trip takedown. Brilz on top in half guard. Davis gets to his feet but has his head in a guillotine, lets it go, then drops levels for a takedown, body lock, can’t get it. Davis ends up with a takedown of his own, now on top in half guard. Last fight should’ve been the main event. Davis on top in side mount. Lands a couple knees to the body. Brilz gets half guard from bottom. Davis trying to work the ground and pound. Brilz tries to scramble but Davis defends and lands several left hands, keeps Brilz on his back for the rest of the round. 10-9 Davis.

Round 2 – Right hand from Brilz. He lands a counter hook. Leg kick from Davis. Again. Leg kick from Brilz. Leg kick Brilz. Leg kick from Davis, Brilz times a right hand and then scores a takedown. Brilz locks on a guillotine but Davis pops his head out after a moment. Davis now on top in guard. Brilz locks on the guillotine again. Davis gets free once more, now inside half guard. Brilz gets up and lands a big knee to the nuggets. Time out is called by the ref. Back at it… Brilz gets a single leg takedown, on top in half guard. Davis gives him his neck again, but gets a reversal and puts Brilz on his back and takes side mount. Davis looking for a Von Flue choke. Knee to the body from Davis. PMN sees the round 10-9 for Brilz.

Round 3 – Touch gloves. Brilz looks for a single, stuffed, eats a left from Davis. Left hand from Brilz. Nice overhand right. Davis shoots, Brilz tries for a guillotine but ends up on his back. Davis on top in half guard. Brilz trying to get up, Davis defends, back to the feet and clinched against the cage. Brilz drops levels for the takedown attempt, no dice. Nice body shots from Brilz, Davis drops levels and gets Brilz to his butt. Brilz slips out and to his feet, as Davis is looking for the single. Brilz landing some punches to the body and hammerfists to the head trying to soften him up. One minute to go. Davis gets to his feet, still looking for the leg. Brilz locks on a standing guillotine, lets it go as Davis dives deep for the single. Brilz rides him and continues landing body shots. Davis gets to his feet as Brilz holds the front headlock. Sorry, but that was a boring ass fight. PMN sees the round 10-9 for Brilz and the fight 29-28 for Brilz.