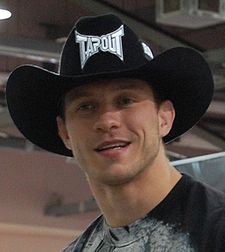 UFC officials have announced that popular lightweight’s Donald Cerrone and Jim Miller have agreed to fight and will headline the upcoming UFC Fight Night on July 16. The five round main event will take place at the Revel Casino in Atlantic City.

Also on the card, a flyweight matchup between John Lineker and Alptekin Ozkilic. Tickets for the event will go on sale May 30th.