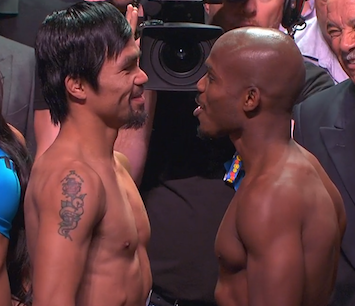 WBO welterweight champion Timothy Bradley, Jr. and Manny Pacquiao are all weighed in and ready to go for their rematch Saturday night at MGM Grand Garden Arena in Las Vegas. Both fighters were on point (Bradley 145.5 lbs / Pacquiao 145 lbs) and looked ripped. There were no altercations during the staredown but Bradley was talking to Pacquiao, telling him, “This is it!” The crowd cheered for Pac Man while Bradley was booed and clearly not the fan favorite in Vegas.

Despite winning the split decision in their first bout and easily defeating Juan Manuel Marquez, who KO’d Pacquiao, oddsmakers currently have Bradley the underdog at +200, while Pacquiao is the favorite at -250.

Watch the full episodes of HBO’s 24/7 Pacquiao vs. Bradley 2 here.

Join us here at ProMMAnow.com Saturday night, April 12, for LIVE round-by-round, play-by-play coverage of the fight.

And check out the photos from the weigh-ins and face-off below:

3 thoughts on “‘Pacquiao vs. Bradley 2’ fight odds and weigh-in photos”