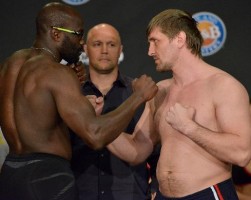 Who are you picking? Oddsmakers have Minakov as the favorite at -320 while they have Kongo at +250.

THOUGHTS: A couple of shots to the groin from Minakov in round one made it an even round. Minakov took round two but looked completely exhausted after the round. Minakov took round three. Kongo took round four. Minakov got a takedown to start round five and kept Kongo on his back the whole round, got full mount and delivered enough ground and pound to keep the ref from standing it up. Not the most exciting way to win, but he got it.