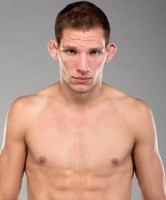 UFC officials have announced a middleweight bout between two undefeated prospects for the upcoming UFC Fight Night 41 event that’s set for May 31. England’s own Luke Barnatt has agreed to take on Sean Strickland.

The event will take place in Berlin, Germany, and will be headlined by a middleweight fight between Mark Munoz and Gegard Mousasi.

Barnatt (8-0) is coming off his third consecutive win in the UFC, a first round TKO win over Mats Nilsson.

Strickland (14-0) is coming off a first round submission win in his UFC debut against TUF alum Bubba McDaniel.

Tickets go on sale to the general public on April 4. UFC Fight Club members get a pre-sale period beginning April 2, and UFC.com e-newsletter subscribers can buy tickets on April 3.