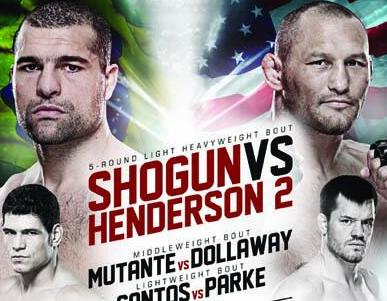 http://youtu.be/zkSDamf4yfA
Remember, this week’s UFC Fight Night 38 event is on Sunday. The Fight Pass prelims kick off at 4 p.m. ET, with the FOX Sports 1 prelims airing at 5 p.m. ET and the main card on FOX Sports 1 at 7 p.m. ET. The headliner features a rematch between Dan Henderson and Mauricio “Shogun” Rua, who put on a “fight of the year” caliber performance back at UFC 139 in Nov. 2011. In their first meeting the bout went all five rounds and ended with Hendo getting the unanimous decision nod. Since then though, Hendo has lost three straight, including his most recent KO loss to Vitor Belfort this past November. Shogun on the other hand has gone 2-2, most recently dispatching James Te Huna via first round KO this past December. Oddsmakers have Shogun the favorite at -225, with Hendo at +180. Who you got?