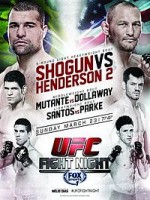 The UFC Fight Night 38: Shogun vs. Henderson II event is set to take place on Sunday, March 23, in Natal, Brazil. The event will be headlined by the rematch between former UFC light heavyweight champion Mauricio “Shogun” Rua and former Strikeforce light heavyweight champion Dan Henderson. The two first fought at UFC 139 in what became an instant classic, and one of the most brutal fights in terms of damage inflicted by both fighters. Henderson edged Rua via unanimous decision in what was deemed “Fight of the Year” in 2011.

The co-main event will feature Cezar Ferreira and C.B. Dollaway in a middleweight matchup. The preliminary fights will begin airing at 4 p.m. ET on the UFC Fight Pass subscription service. The preliminary fights will then transition over to FOX Sports 1 at 5 p.m., and the main card will begin airing on FOX Sports 1 at 7 p.m. ET.

The full UFC Fight Night 38 fight card is below: