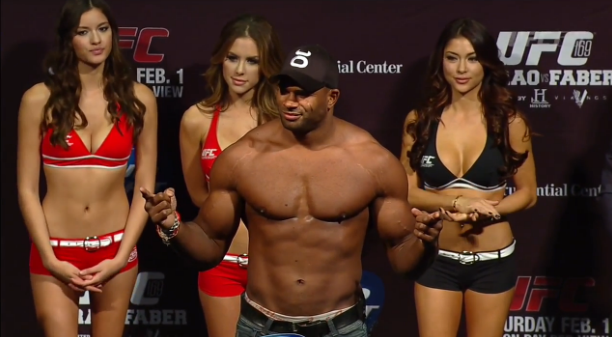 Alistair Overeem absolutely dominated Frank Mir in his UFC 169 heavyweight bout on Saturday in Newark, New Jersey. However, UFC President Dana White wasn’t impressed at all, citing that Overeem fought too safe overall and basically had a “crappy” performance.

I do think Overeem could have fought differently, keeping the fight on the feet instead of inside the guard/half-guard of Mir for a good portion of the fight. His best chance of ending the fight would have been on the feet with strikes. However, that’s not to say that Overeem didn’t try to end the fight with strikes on the ground. He hit Mir with some monster strikes and elbows on the ground, and somehow, Mir was able to survive.  I think it was the fact that Overeem admitted that he fought somewhat “safe” and wanted to “secure the victory” in his post-fight interview with Joe Rogan that ticked White off.

The fact of the matter is that Overeem was coming into the Mir fight off  back-to-back KO losses. The other crazy fact is that Overeem was winning about 98% of BOTH of those fights before getting knocked out, and the reason he was knocked out was because he gassed while throwing a tremendous amount of strikes after hurting both those opponents. If Overeem had lost the fight with Mir, there was a good chance that he would have been cut from the UFC roster.

So Overeem goes for the spectacular win twice and loses both of those fights prior to Saturday night, and Dana White basically tells him that it’s do or die and criticizes him for fighting somewhat safe?

Alstair Overeem can’t win for losing with Dana White. However, I wouldn’t call landing 131(62 of those were significant strikes according to Fightmetric) more strikes than Frank Mir a “crappy” performance.