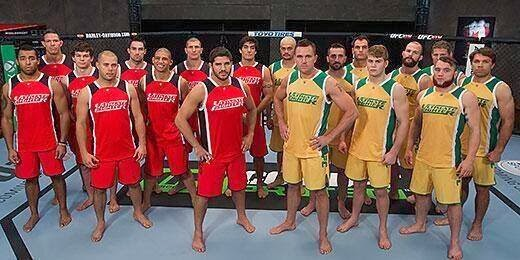 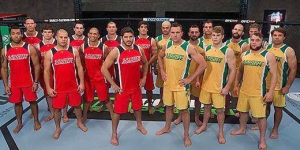 “The Ultimate Fighter Nations: Canada vs. Australia” begins with a new intro package, as UFC president Dana White along with the season’s cast explains the importance of this opportunity to not only performing for themselves, but also to represent their countries as well.

Fighters from both teams express their excitement as they see an “official” UFC facility for the first time. The facility, located in Quebec City, Quebec, Canada, fills with fighters and their respective coaches as both teams prepare to witness the traditional coin toss to start the competition.

Coach Kyle Noke from team Australia does the honors, but as the coin lands, it does so in favor of Team Canada coach Patrick Cote, who announces that the fight pick will be later in the episode. As former contestants on the show themselves, both coaches know exactly what their fighters are going through, and that is reiterated to their teams in the locker rooms.

Per previous seasons, there is a lot at stake during the fights, with $25,000 up for grabs at the end of the season for best fight, knock out, and submission. Additionally, the fighters control their own financial destinies with a cool $5,000 on the line for earning a finish.

This season features both welterweights and middleweights, and as the fighters arrive at the fighter house, it’s clear that the house was chosen for its Canadian feel. The log cabin style house looks to be situated in the middle of nowhere, nestled in a remote area surrounded by forest.

As the episode continues, the first fight is announced with Team Canada’s Kajan Johnson stepping up to compete first with a chance to advance in the welterweight competition. His opponent is to be Team Australia’s Brendan O’Reilly.

Johnson is a very excitable fighter, who has had ups and downs in his career to this point. Coming off a two year absence from fighting, Johnson admits that he is still not a 100% as he continues to battle through several injuries. Despite the injuries, Johnson still possesses an incredible amount of confidence stating that he is as dangerous as ever heading into the opening bout of the season.

Team Australia seems to be at a disadvantage– at least to start the competition– as many of the fighters are shown at the TUF house trying to acclimate to the time change and fight off jet lag from the travel.

Back at the training center, both Johnson and O’Reilly make weight, and with that it’s time for the first fight of the season.

Round 1 – O’Reilly doubles up on his jab to start. He then ducks in for a takedown attempt that is shrugged off by Johnson.  Johnson backs up and fires off a left hook and a knee as O’Reilly continues to press forward looking to take the fight to the mat.  O’Reilly presses Johnson on the cage and finally gets the takedown but he is bleeding from the knee that he ate while coming forward. Johnson works back to his feet but is taken back down once again after O’Reilly manages to lock his hands and secure a bodylock takedown. Johnson goes to his very active guard, controlling the posture of O’Reilly while threatening with submission setups. During a scramble, Johnson secures the ankle of O’Reilly and nearly gets the finish with a slick heel hook. O’Reilly manages to spin out of trouble but loses position as Johnson reverses control, taking the back of O’Reilly and working him to the mat. Johnson quickly advances to the back of O’Reilly and after some hand fighting, the fighters separate and swing for the fences. O’Reilly changes levels and shoots across the cage, eating another knee as they reach the fence. O’Reilly ends up on his knees, and Johnson capitalizes, spinning to take his back and locking up a quick rear naked choke. The tap comes quickly, and just like that Kajan Johnson is the season’s first fighter to advance.

With the victory, Team Canada retains control of the matchups, and Coach Cote immediately announces the next fight. To kick off the middleweight competition, Team Canada’s Elias Theodorou will face Team Australia’s Zein Saliba.