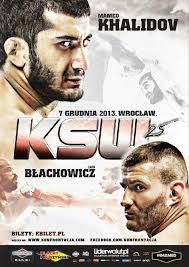 In the co-headliner and for the KSW Welterweight Title Poland’s Aslambek Saldov picked up his third straight win by defeating Brazlian Daniel Acacio via unanimous decision. Also on the card, UFC vet Oli Thompson of England defeated Poland’s Kamil Walus via second round TKO in heavyweight action.

The full KSW 25 results include: