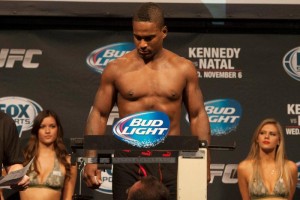 UFC Fight Night 35 has landed several fights for the January 15th event that takes place at the Arena at Gwinnett Center in Duluth, Georgia. The main event has been set between middleweights Costa Philippou and Luke Rockhold. The card is taking shape with some key match ups.

Lorenz Larkin will look to make it back to back wins after an impressive outing at UFC Fight Night 31. He and Chris Camozzi were in a fight of the night caliber fight that saw Larkin walk away with a unanimous decision win. He will meet Brad Tavares. Tavares defeated Bubba McDaniel at UFC Fight Night 27 and has won four straight fights.

A welterweight duel has been set as Adlan Amagov  will meet Jason High. Amagov has claimed three straight wins including two first round finishes. His last loss was in January of 2012 which was only his second defeat in sixteen outings. High is going for his third straight win after submitting James Head in Indianapolis and notching a decision over Anthony Lapsley at UFC 167.

Brian Houston will attempt to get his first win inside the Octagon as he meets Trevor Smith. Houston was put away early in Ft. Campbell by Derek Brunson for his first professional loss. Prior to that he was on a four fight winning streak. Trevor Smith needs a win and needs to avoid his third consecutive loss.  He came up short in winning a fight of the night bonus  by dropping a split decision to Ed Herman back in July.

Here is a look at the current UFC Fight Night 35 card as it stands.