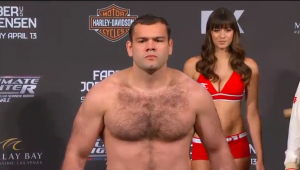 The match up between Gabriel Gonzaga and Shawn Jordan is one that many people are sleeping on. Both men are on a tear, and both men have finishes in their last few bouts. When you looks at the records of these two men, 14 of Jordan’s 15 wins are finishes, and all 15 of Gonzaga’s wins are finishes. When you add in the fact that the winner of this bout will probably advance into the top 10 of the UFC heavyweight division, sparks are going to fly. Here’s my breakdown of the UFC 166 fight.

Jordan is one of the most athletic Heavyweights in the division, and he also is one of the most explosive. He owns 11 of his 15 wins by way of knockout. Including some notable wins over Pat Barry and Mike Russow. Be sure to watch for Jordan to try to keep the fight standing in this match up.

This category isn’t even close so I’ll keep it short and save us all some time. Gonzaga is a Brazilian Jiu-Jitsu Black Belt World Champion, and Jordan got taken down and worked for a round by Mike Russow, let’s just put it that way.

Gonzaga has failed in the past against good wrestlers like Randy Couture and Shane Carwin, but he has had success over good strikers like Ben Rothwell, Dave Herman, and Mirko Cro Cop. So this all really depends on which perspective you look at, once the fight hits the mat Gonzaga is great, but he also has a hard time taking it to the mat.

Shawn Jordan is by no means an experienced grappler. The upside is that he has wrestled in the past and uses that wrestling in reverse to keep the fight where he wants it (on the feet). The real question here is the fact that Jordan hasn’t faced an experienced and dangerous grappler like Gonzaga.

So this is a great fight in my eyes, and I don’t understand the people who say it is going to be boring. Maybe I’m just a sucker for heavyweights, but I’m looking forward to this fight way more than the Melendez vs Sanchez bout. In the end I’m going to give this fight to Gonzaga primarily because he has shown the ability to knock people out in the past, and the fact that Jordan got man handled by Mike Russow. Had Russow not gassed, the fight would have been his. If you give Gonzaga an opportunity like that, he’ll end it in no time.