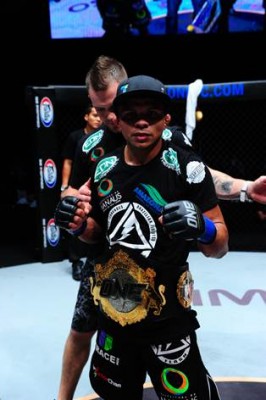 18 October 2013 – Singapore: ONE Fighting Championship™ (ONE FC), Asia’s largest Mixed Martial Arts (MMA) organization with a 90% market share, captivated the packed crowd in attendance at the Singapore Indoor Stadium for ONE FC: TOTAL DOMINATION. Fans were treated to a night of exhilarating action, culminating in a title unification bout between Bibiano Fernandes and Soo Chul Kim.

CEO of ONE Fighting Championship™ Victor Cui stated, “ONE FC has delivered yet another night of world-class MMA action to a packed out Singapore Indoor Stadium that had the fans on the edge of their seats.”

Bibiano Fernandes was crowned the undisputed ONE FC Bantamweight World Champion when he defeated former World Champion Kim by unanimous decision. Both fighters swung for the fences in several ferocious exchanges. Fernandes took control of the contest with several well-timed takedowns that neutralized the aggressive South Korean. Soo Chul Kim found the most success in the fourth round, stuffing Fernandes’ takedowns and even getting the Brazilian on his back in the middle of the stanza.

Aoki made a successful debut in the Featherweight division by earning a decision victory over Cody Stevens. The opening stanza saw Aoki implement his patented top-heavy grappling arsenal. Aoki continued stifling his opponent in rounds 2 and 3 with dominant ground control. Stevens was unable to solve Aoki’s puzzle and succumbed to a unanimous decision loss.

Eddie Ng extended his winning streak in ONE FC to four with an armbar submission victory over fellow Lightweight contender Peter Davis. After several exchanges on the ground, Ng opportunistically locked the Malaysian’s arm in a submission which led to the tapout. After the contest, he empathically stated the he will never face Shinya Aoki for the ONE FC Lightweight World Championship title although he will love an opportunity if Aoki ever vacates the title to stay in the Featherweight division.

Middleweight veterans Rafael Silva and Tatsuya Mizuno put on a fight that had the Singapore crowd screaming at the top of their lungs. The first round was a back-and forth affair that demonstrated the many complexities of mixed martial arts. Silva landed several strikes that had Mizuno backing off while Mizuno had several submission attempts that Silva managed to get out of. Both fighters came out swinging in the second round and each had their moment of dominance. Silva managed to open a cut on Mizuno while the Japanese had Silva backpedaling with diverse strikes. Mizuno started the third round brilliantly, using his reach to land numerous kicks on his game opponent. The resilient Silva fought resiliently off his back, even attempting several submission attempts of his own. Mizuno relentlessly stayed on the assault, and the strong finish earned him the unanimous decision on all three of the judges’ scorecard.

Sylvain Potard pulled off probably the biggest upset of the night when he knocked out former NCAA Division 1 Wrestler Jake Butler. The Frenchman was the first to attempt a takedown, but Jake Butler imposed his signature wrestling-heavy offense in the first round. Potard quickly gained a superior position on the ground and the heavy-handed striker landed several unanswered strikes to conclude the Light-Heavyweight bout and end Butler’s undefeated record.

The rematch featuring Mitch Chilson and Shannon Wiratchai ended in decisive fashion to put an end to the controversy surrounding the finish of the first bout. With Chilson dazed and on his back from an earlier strike, Wiratchai landed a soccer kick and punch combo which Chilson failed to recover from and effectively concluded the Featherweight contest.

Two Flyweights who are experts in Asian martial arts clashed in the ONE FC when Kun Khmer Champion Khim Dima took on Asian Games Wushu gold medalist Rene Catalan in Flyweight action. Both Flyweights came out in lightning quick strikes which the other narrowly managed to get out of the way to start the contest. The rest of the first round was close with Catalan coming close to finishing the bout with an armbar. The tide turned on the second round when Dima hit several well-timed strikes while Catalan attempted a takedown, dropping Catalan and prompting the referee to stop the fight.

The heavily-anticipated contest between Malaysia’s first female mixed martial artist, Ann Osman, and Singapore’s top female prospect, Sherilyn Lim was a back-and-forth affair that had the crowd on the edge of their seats. Osman took Lim down on several occasions, but Lim had the better offense, scoring heavily with ground-and-pound. The bout went to the judges’ scorecards and they awarded the victory to Sherilyn Lim by a razor-thin split decision.

The first round between Juan Wen Jie and Alex Lim was contested primarily on the feet, with Juan Wen Jie peppering his opponent with knees and punches. He eventually finished his opponent in the early seconds of round two with a well-timed left hook.

Stephen Langdown kicked off the night by defeating Malaysia’s Marc Marcellinus in the first round. The bout was predominantly a standup affair. The finish came when Langdown landed a flurry of knees and strikes that Marcellinus had no answer for.

With a 90%+ market share in Asia, ONE Fighting Championship is Asia’s largest Mixed Martial Arts (MMA) organization.  Headquartered in Singapore, the world’s most exciting mixed martial arts organization hosts the best Asian mixed martial artists and world champions, all signed to exclusive contracts, on the largest media broadcast in Asia. ONE Fighting Championship™ has partnered with FOX and STAR Sports for an unprecedented 10-year cable television deal with a coverage that spans 70+ countries across the world.