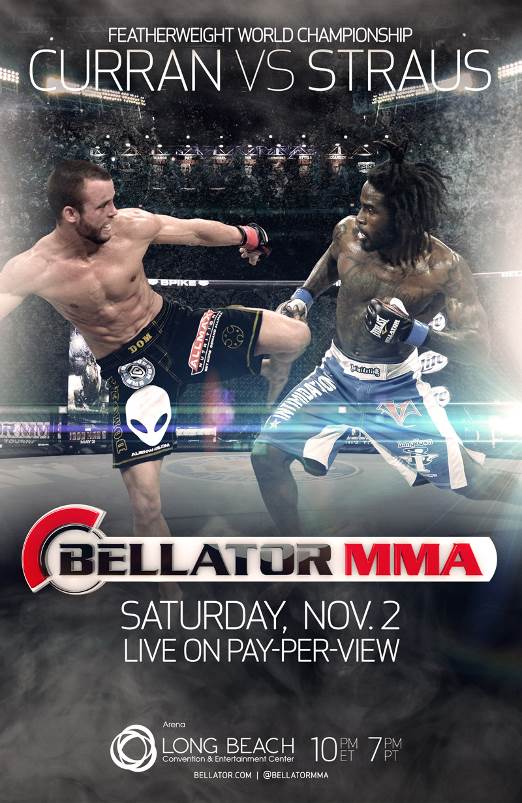 Bellator Featherweight Champion Pat Curran will look to make his third title defense when he faces Featherweight Tournament winner Daniel Straus live on Pay-Per-View November 2nd from The Long Beach Arena. Curran vs. Straus now joins a fight card that already features King Mo vs. Emanuel Newton for the Interim Light Heavyweight Title, the rematch of 2011’s fight of the year between Michael Chandler and Eddie Alvarez for the Lightweight World Title, as well as the main event of the evening, Rampage Jackson vs. Tito Ortiz.

“Rampage vs. Tito” will be held at Southern California’s Long Beach Arena on Saturday, November 2nd, with tickets on sale now. Tickets can be purchased on Bellator.com, Ticketmaster.com, as well as at The Long Beach Arena Box Office.

“Pat Curran’s one of the best Mixed Martial Artists we have in the game today,” Bellator Chairman & CEO said. “Before breaking his hand Straus was a fixture in the Top 10 rankings with a huge amount of talent. Curran vs. Straus is a fight I’ve wanted to see since Daniel won the tournament a year ago last May.  This should be an epic world title fight and our PPV provides the perfect stage.”

“I’ve been with Bellator since the beginning, and seen my career grow as Bellator has,” Curran said. “It means the world to me to be able to defend my title on our first Pay-Per-View, especially with such a tough fight ahead of me. I’m not taking Straus lightly. He is an incredibly tough featherweight, and I’m not even thinking about our first fight in 2009, we are two totally different guys right now. This card is stacked, and I want to give Bellator and all our fans a great show.”

Straus suffered a broken hand and has been sidelined indefinitely since winning the Season Six Featherweight Tournament. After nearly a year on the sidelines, Straus is ready to finally fight for the title and avenge a previous loss to Curran. That was just the professional fight for Straus when he lost to Curran via second round KO. However, the featherweight has gone (17-1) since that bout with seven finishes in that time span.

“It’s finally here. I’ve faced so many setbacks over the last year, and my title shot is finally here,” Straus said. “When Pat and I met in 2009, we were two completely different fighters. Both of us have developed so much in that time, but I still want that loss of my record. That fight taught me a lot about where I was as a fighter, especially considering I’ve gone 17-1 since we last met. I’m just excited to be able to get a chance to fight for a title on a huge stage like this. I really don’t know how this fight is going to end, but I envision it going quickly. This won’t be a long, drawn out process. I’m going in for the kill.”