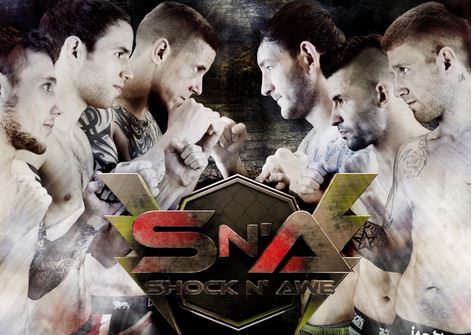 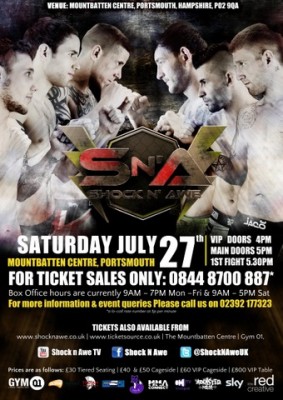 The headline bout for Shock’N’Awe 14 has been announced as James Pennington (7-1) faces Leigh Remedios (18-10) for the Shock’N’Awe British bantamweight title. The event will take place at the Mountbatten Centre in Portsmouth, England, on July 27.

Additionally, SNA 14 will feature a matchup between Phil Else and Scott Hunt, who will engage in a featherweight battle. Also, WMMA makes a return to Shock’N’Awe as Kirsty Davis takes on Jess Offermans in a strawweight showdown. For ticket information please visit: www.shocknawe.co.uk

James Pennington last fought at Cage Warriors 53 in April, where he scored a third round submission victory over James Doolan. Prior to that he dropped a first round submission loss against Davey Grant at SNA 11 in July 2012. That loss snapped a six fight winning streak he has been on, defeating notable fighters such as Sam Hewitt and Carl Hunt. Pennington will undoubtedly look to remain on the winning track with a good performance against Remedios.

Leigh Remedios recently fought at Into the Cage 8, where he picked up a first round TKO victory over late replacement Craig Allen. That win snapped a three fight skid he had been on, dropping losses against James Doolan, James Saville and Carl Fawcett. Prior to that Lee had been on a two fight winning streak, defeating Steve McCombe and Paddy Doherty during 2009/2010. Remedios now has the chance to pick up a title with a big win over Pennington on July 27.

The Full Shock’N’Awe Fight Card is below: