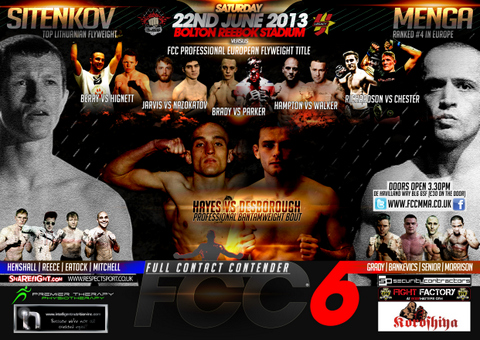 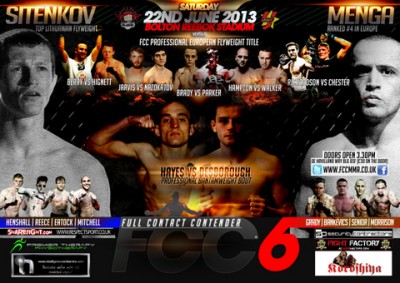 The headline bout for Full Contact Contender (FCC) 6 has been confirmed as current FCC flyweight champion Pietro Menga (9-0) faces European flyweight fighter Artemij Sitenkov (14-9) in a battle for the title. The event will take place in the Premier Suite at Bolton’s Reebok Stadium in Bolton, England, on June 22.

Here is what FCC promoter, Adam Teh, had to say:

“I’m really happy to have Pietro Menga back on FCC. With a talent like that, you know that the big shows are going to come calling sooner or later, so it’s great that Pietro wanted to return to defend his title like a true champion should. Artemij Sitenkov has collected more arms and legs than I’ve collected football stickers over the years. This is a huge test for Menga, and for Sitenkov, it’s a chance to re-establish himself as one of Europe’s top Flyweights.”

FCC 6 will also feature a co-main event matchup between Jordan Desborough and Conrad Haines, who will engage in a bantamweight showdown. Tickets for the event start at £25 and are on sale at the FCC website at: www.fullcontactcontender.co.uk, via the ticket hotline at 07816659015, or through the fighters.

Artemij Sitenkov last fought at Vision FC 5 in December 2012, where he dropped a third round TKO loss against David Haggstrom. Prior to that he suffered a first round submission loss against Patrick Holohan at Cage Contender 14 in July 2012. That loss snapped a two fight winning streak he had been on, defeating notable fighters such as Rob McCrum and Neil Seery. Sitenkov will no doubt look to get himself back into the win column by defeating Menga on June 22.

The full Fight Card for FCC 6 is below: