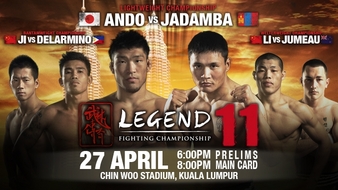 In the main event, Japan’s Koji “The Commander” Ando took on Mongolia’s Jadamba Narantugalag for the Legend Lightweight Championship. It was a closely contested battle with all three judges scoring it 19-19 going into the third round.

Just 47-seconds into round three Narantugalag suffered an injury which left him unable to continue, giving Ando the TKO victory and Legend Lightweight Title.

The complete results for Legend 11 includes:

Founded in 2009 by Chris Pollak and Mike Haskamp, former classmates at Columbia Business School, Legend Fighting Championship is a leading mixed martial arts promotion in the Asia-Pacific and has a broadcast reach of one billion viewers in 152 countries. Visit www.legendfc.com for more information.