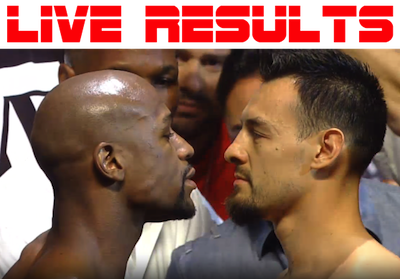 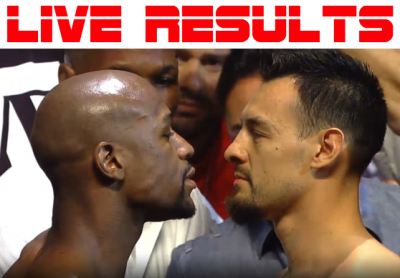 While you’re waiting for the fights to start, be sure to check out the weigh-ins and staredowns, as well as the video of the pre-fight press conference which took place Wednesday, specifically the rant Guerrero’s father went on calling Mayweather a “woman beater”, saying he must have learned that from his father and promising that his son is going to “beat down the woman beater”.

Will the seemingly invincible Floyd “Money” Mayweather finally meet his match? He’s the heavy favorite with odds sitting at about -625 for Mayweather and +425 for Guerrero. But at 30-years-old, Guerrero is six years younger than the aging champ and his only defeat was a split decision loss way back in 2005. Guerrero is coming off a unanimous decision win over Andre Berto (28-2) this past November.

NOTE: Refresh your page often for updates as results will be provided in real-time following each round of action.

Round 1 – Guerrero seemed to show him too much respect in the first. First round goes to Mayweather 10-9. Not much action. Floyd using his defense very well.

Round 4 – Quick right from Guerrero. Floyd responds with two of his own. Using his footwork well and getting out of the way of shots very quickly. Left counter from Mayweather. Big straight right. Hands down, picking his shots, wasting no energy. Guerrero has him against the ropes, lands a right hook and Floyd fires back. Ooohs and ahhs from the crowd as Floyd beats Guerrero to the punch repeatedly. Mayweather 10-9.

Round 6 – Guerrero swings big with a right hook but nothing is there. That’s the story of Floyd Mayweather. His reflexes. Nice left from Guerrero. Right from Floyd, again. Clinch, ref separates, clinch again, separates them again. Floyd moving on the outside looking for an opening, hands down. Nice left and right to body from Guerrero. Right to the chin. Left counter from Floyd. Floyd’s back in the corner, but he gets out quickly as Guerrero swings. Mayweather ducking and dodging. 10-9 for Floyd.

Round 7 – Floyd’s father told him between rounds that Guerrero is a novice and not in the same class, and to keep doing what he’s doing. Clinch, kidney shots from Guerrero. Ref separates them. Floyd moving from corner to corner, then the center. Circling the ring and picking his shots and counter shots at Guerrero. Clinched against the ropes, ref separates them. First boos from the crowd. Nice left to body from Floyd. Dirty boxing, nice couple uppercuts from Floyd. Left hook from Floyd. 10-9 Guerrero. Floyd took that round off it seems.

Round 12 – One more to go. Guerrero needs a knockout. He comes out stalking. Floyd holding him. REf separates them. Floyd ducking and dodging around the ring, right counter. Crowd boos. Clinch, body shots from Guerrero. One two from Floyd. Guerrero is still in this fight though, still being aggressive. Floyd is just simply out boxing him. Hands down, poking his head out at Guerrero, he makes him miss over and over. Then when he lands he makes it count. Right from Guerrero. Right hook from Floyd. Clinch, dirty boxing. Left hook from Floyd as he escapes. Right hook. Right from Guerrero. Guerrero throws his hands up — not sure why. 10-9 and 10 rounds to 2 for Floyd as I see it.

Floyd’s dad starts to yell out to Guerrero that he’s the only decent guy in his camp and Floyd told him not to do that.  Floyd called Guerrero an “amazing warrior” and credits his father for the win. He also said the less you get hit the longer you last in this game. Floyd also said he hurt his right hand during the bout and it probably kept him from getting the KO. It’s noticeably swollen.