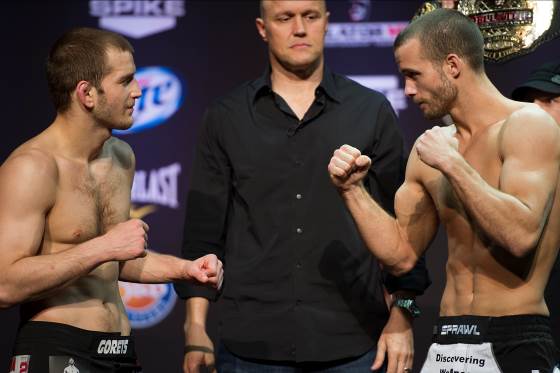 Bellator MMA’s eighth season comes to a close Thursday night at Revel in Atlantic City with two tournament finals and a featherweight title bout. Fighters competing on the Bellator 95 card took to the scales Wednseday, with featherweight headliners Pat Curran and Shahbulat Shamhalaev both weighing in at 144.7 pounds. Curran’s title will be on the line against Shamhalaev, who won Bellator’s season seven featherweight tournament.

The complete Bellator 95 weigh-in results are as follows:

Be sure to check out our exclusive interview with Bellator Chairman & CEO Bjorn Rebney from this past week in Tampa, as well as our Pro MMA Now Radio interview with middleweight tournament finalist Doug Marshall and hear what he had to say about his road to the finals and what he expects from his opponent Brett Cooper.
[ads2]
[ads1]