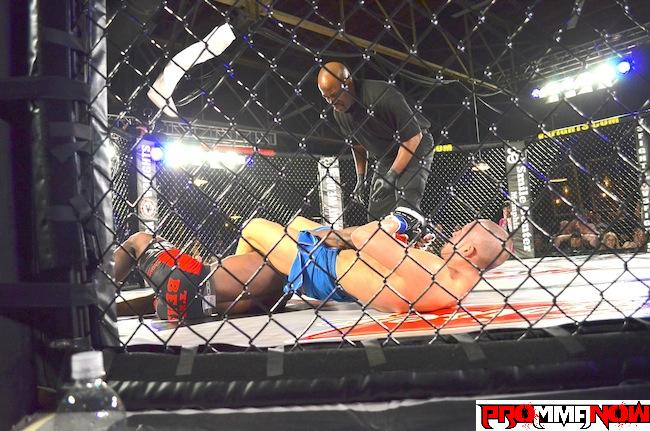 [ads2]
V3 Fights will make their sophomore appearance in Nashville, Tenn. on Saturday, May 11, when the Memphis based mixed martial arts promotion returns to Marathon Music Works.

The event will be headlined with a V3 Fights Bantamweight Championship bout as title-holder Ronnie Lawrence (11-1) puts his belt on the line against former two-division champ “The Baby Dragon” Sammy Lua (19-2).

Lawrence looked very impressive in his last outing, back in February, when he won the V3 Fight Bantamweight Title with a third round armbar against Marquese Branch (Branch’s corner actually threw in the towel; see photo). He was ProMMAnow.com’s pick for “Fighter of the Night” on that card so kudos to V3 Fights for putting him in the headliner spot on the May 11 card.

Also on the card, Nashville Muay Thai specialist Brandon Pemberton (8-1) will face SSF Academy’s Zack Hicks (14-4), undefeated Jorge Medina (3-0) will look to keep his record in tact against Adam Nash (4-1) and Hannah Rogers (5-0) will vie for the women’s bantamweight championship against a soon-to-be-named opponent.

Tickets for “V3 Fights: Lawrence vs. Lua” start at $25 and go on sale April 4 at www.v3fights.com and www.marathonmusicworks.com. Tickets will also be available at the Marathon Music Works Box Office.

“V3 Fights: Lawrence vs. Lua” will air on both Comcast Sports South and Aggression TV.

Check out this promo for the May 11 event in Nashville, Tenn.: