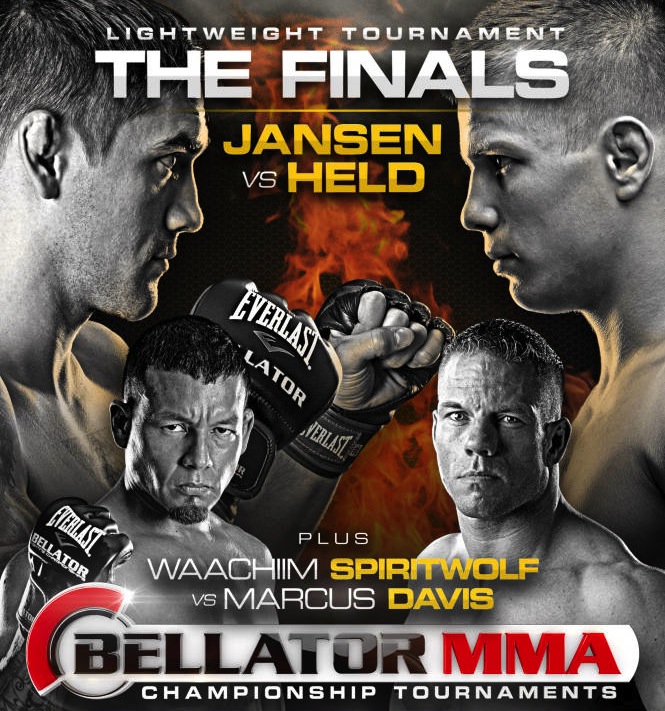 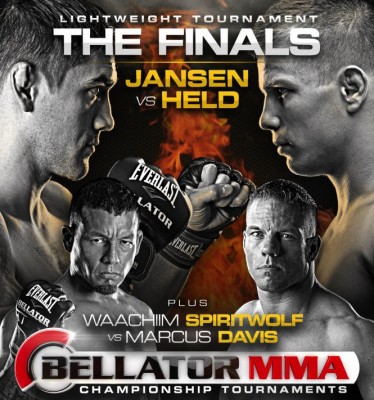 Bellator 93 will broadcast LIVE on Spike TV starting at 10 p.m. ET, with the prelims streaming LIVE on Bellator.com at 7:30 p.m. ET. ProMMAnow.com will provide LIVE results and play-by-play commentary throughout the evening.

Also on the card, UFC vet Marcus Davis returns to action for the first time since Oct. 2012 as he takes on the always exciting Waachiim Spiritwolf in a welterweight featured bout that’s sure to entertain.

Round 1 – This is Erickson’s pro debut. This is Lenke’s second pro bout. Touch gloves. Leg kick Erickson. Again. Slips on a head kick attempt, gets up. Right hand from Lenke. Right cross. Front kick Erickson. Overhand right. Couple of right counters from Lenke score. He clinches up with a body lock as Erickson tries for a head and arm throw. Erickson defends, eats a knee to the body, they trade big punches. Erickson backs out of the clinch. Right from Lenke, another right then left. Erickson fires back, clinch, knee to the face and a big right from Lenke, he’s rocked. Lenke lands more big shots, rights and lefts, Erickson is bloody and finally crumples to the mat and the ref steps in to save him. Good action!

Round 1 – Leg kick, knee from Murdock. He puts Raio on his back, but lets him back up. Head kick from Murdock, leg kick. Raio eats a huge knee as he shoots in, goes down and covers up. Murdock takes side control, knee to belly, drops a big elbow. Hammerfists and punches. Raio has not thrown a single punch this whole fight yet. More punches from Murdock, he stands up, kicks the legs of Raio. He throws an upkick for his first strike of the bout. Murdock lets him up. Raio backs him up with a punch combo, lands a right. Another right. Big right from Murdock scores. One minute to go. Murdock switches stances, misses a couple of strike attempts. Trying to set up a spinning attack, lands a glancing back kick. PMN has it 10-9 Murdock.

Round 2 – Raio lands the first punch of the round. Body kick from Murdock. Big punch combo from Raio, lands a huge right hand to cap it off. Punch combo from Raio, caps it off with a knee that touches the chin of Raio. Uppercut from Raio but eats a counter punch. Leg kick from Murdock. Murdock looking to set up that spin attack again. Left hand, knee from Murdock, puts Raio on his back. Raio covers up as Murdock drops elbows. Raio is cut over his right eye. Murdock takes top control with half guard. Ref halts the bout to check Raio’s cut. Pretty significant cut between his eyes but the doc lets it go. Nice uppercut from Murdock. Right from Murdock, catches a kick and dumps Raio on his back, lays on top in half guard. Ref wants action. Raio holds on tight. Murdock smothers Raio with his hand and forces the standup. Spinning back kick from Murdock as he chases Raio, lands and knocks Raio down before the bell. He doesn’t follow up though and the bell sounds. He may have been able to finish him there. PMN has it 10-9 for Murdock.

Round 3 – Raio has a huge lump on his right eyelid so that’s it’s almost swollen shit. Clinch and knee from Murdock. Big exchange but everything just missing. Good defense from Raio. Murdock attacks but Raio covers up and defends the punches. Spinning back kick to the gut from Murdock followed by a takedown. Murdock on top in half guard, body shots with 2:00 to go in the fight. Hammerfists and elbows and punches from Murdock. Raio just tries to hang on looking for the standup. Big elbows from Murdock foces Raio to turn to his side and cover up, Murdock follows up with big punches and the ref stops it. Happy 22nd birthday to Vince Murdock. Keep an eye on this kid.

Round 1 – Pacheco shoots, puts Pierre on his back. Pacheco inside full guard landing body shots. Tight guard from Pierre. Hammerfists and short punches from Pacheco. Beautiful guard pass from Pacheco, explosive. Knee to body, looking for a Americana and Pierre taps. Elementary. Keep an eye on 28-year-old Joe Pacheco as he moves to 6-0.

Round 1 – Big right from Butcher as they clinch up, Hermansson turns him around on a body lock takedown, ends up inside guard as Butcher goes for a triangle, locks it up quickly, pulls down on the head. Hermansson tries to struggle out, drops to his knees. Butcher readjusts it, still working on it after over a minute and Hermansson finally taps. Wow! Impressive. Most guys would have given up on the submission attempt after that long. Butcher is part of Team Jorge Gurgel and he thanks Jorge who is in his corner. Butcher says he has the best guard in MMA. He says he’s not being arrogant, just truthful. Butcher also says from what he saw in North Carolina, he could’ve won Bellator’s middleweight tournament in one night — Pride style – three fights in one night.

Round 1 – Page comes from a point-fighting kickboxing background. Should be an interesting bout as Page has a five inch read advantage. Touch gloves. Page lands a right hook, drops Sanders with one more straight right catching Sanders coming in. Sanders, the hometown guy, goes down covers up and the ref steps in. One punch knockout. Sanders sits in his corner bleeding from his nose. Wow! Keep an eye on Michael Page guys. That looked like some Anderson Silva stuff right there the way he caught him so quickly coming in. Reminds me of Anderson Silva vs. Forrest Griffin. Page improves to 4-0.

Round 1 – Both guys making their Bellator debuts. Vitkay has an 11-12 record. Body kick from Vitkay stuns Peterson, he runs at Peterson and lands a flying knee. Vitkay immediately locks up a guillotine choke as he jumps guard. About 8 seconds later the ref checks Peterson’s hand and stops it as Peterson is unconscious. Another quick finish as no fight has gone the distance yet on this card.

Round 1 – Davis’ Bellator debut. His second fight ever in his home state of Maine. Davis closing in. Spiritwolf looking to counter. Body kick from Davis. Leg kick Spiritwolf. Knee from Davis. Leg kick inside. High kick blocked. Spiritwolf shoots, sprawl from Davis, standing guillotine locked up, turns him to the cage and releases. Body kick from Davis. Leg kick from Spiritwolf, counter left from Davis. Left hook from Spiritwolf catches Davis behind the head. Davis lands a knee to the groin in the clinch and time is called. The crowd is chanting bulls—- as Spiritwolf rolls around in pain. LOL. Big John handled a low blow the best I’ve ever seen a ref handle it. He literally made the fighter get up and start walking it off, and it really helped. It seemed insensitive to me at first but, he knew what he was doing. The difference here is Spiritwolf is allowed to just sit on his knees and grimmace and it’s not conducive to keeping this fight going or helping the cause. Spiritwolf refuses to stand up despite several warnings. The whole place is chanting “Bulls—“.

You decide if you think it was that bad:

OFFICIAL RESULT: Waachiim Spiritwolf vs. Marcus Davis ruled a No Contest after Spiritwolf takes a low blow and chooses not to continue after 5 minutes.

Round 1 – Right from Martinez, then a big overhand left, a right, left, Wiuff goes down and Martinez finishes him off with two more right hands on the kisser. Eight punches thrown in all; four landed. Just like that, easy as 1,2,3. Wiuff is out and referee Dan Mirgliotta steps in. Martinez has been working with Roy Nelson and King Mo and working on his hands with Jeff Mayweather.

Round 2 -Touch gloves. Held shoots and gets the takedown after a punch exchange. Held moves to side control. Jansen recovers full guard. Elbow from Held, tries to pass, gets to half guard. Held goes for a D’arce, Held goes for a toehold, eats a hammerfist or three from Jansen. Held lets go the foot and Jansen gets full mount on the BJJ black belt. Short elbow and body shots from Jansen. Held trying to hold on. Held gets to half guard, goes for an inverted armbar, switches to a leg lock. Jansen lands some punches. They scramble and Jansen postures up with big hammerfists and punches. Now lands a few elbows, two more big elbows. Held goes for a kneebar, then a heel hook. Jansen escapes and lands a big body shot. PMN has it 10-9 for Jensen.

Round 3 – Jansen looks fresher. Big leg kick from Jansen. Again, then a left hand. Held looks tired. Right hand from Jansen, then a right uppercut and a left, then a leg kick, body shot. Front kick, right hand, teeing off on Held. Leg kick. Left hook, uppercut, right hand, uppercut. Body kick. Leg kick buckles Held, but he gets a takedown. Jansen scrambles right up. Uppercut from Held. Body shot from Jensen. Body shot Jansen. Held shoots, ends up on bottom with Jansen on top in half guard. Elbows to the body from Jansen. Held goes for an armbar, locks on an omoplata. Now a toe-hold. Jensen rolls. Held locks up a tight heel hook now.  Jansen drops elbows and scrambles out, inside full guard. Jansen postures up with big body shots. Held looks for the arm but time is up. PMN has it 10-9 and 29-28 for Dave Jansen.

Jensen collects $100,000 and will go on to fight champ Michael Chandler for the 155 pound title.

Big thanks to @ZProphet_MMA for all the GIFs.
[ads1]