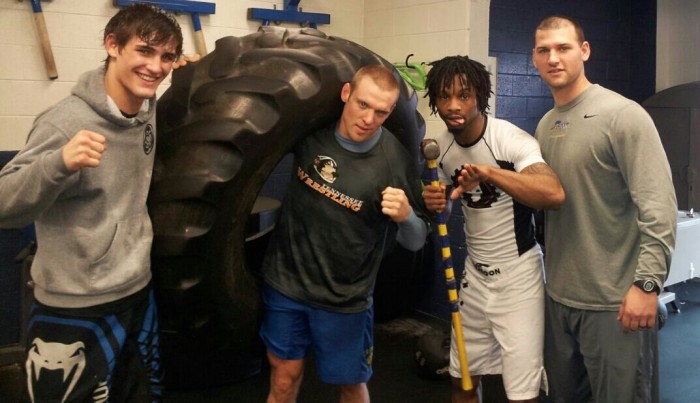 Nate Hoffmeister lives in Knoxville, Tenn. but the effects of his work are seen all over the country. He is the head Strength & Conditioning Coach for the powerhouse school Christian Academy of Knoxville – which seem to be piling state and national titles on top of each other so quick it would make your head spin.

Since he started working with KMAA’s fighters he has been the single biggest additional factor that made our gym capable of competing on the international stage. Everyone out there should listen to what he has to say…

A Strength and Conditioning coach that helps enhance an athlete’s athletic ability. My job is to take the God given talents and try to refine the skills to max potential. I train athletes in the areas of strength, power, speed, conditioning, injury rehab, prehab, mobility, agility. You name it I do it. The main reason people need a strength coach is for accountability and knowledge. The average person does not realize the importance of programing a workout program, when to push, when to ease off and what and when to do things. Also the strength coach motivates and keeps athletes accountable for results.

My hours are crazy. I train in the morning starting at about 6 a.m. and go until 7, 8 or later depending on who I am working with, what event is coming up and what the athlete needs.

Who else do you report to in your field?

I usually report to the head coach, I take the system the coach puts in place and find ways to enhance that system. My job is to make the head coach’s job easier and make his system better than before.

My philosophy is ever changing in the sense that I always want my athletes adapting and growing. I like to say ‘train hard fight easy” and “you get paid to train”. We try and never do the same thing in every workout. The format will be the same but the work is different. The randomness is like a fight you never know what to expect. I like to put a focus on the little things such as shoulder rehab, balance, neck work. When you have two fighters that are equally matched skill wise, then the little things will be the deciding factor. And in that every fighter is different. In training camp, depending on the time frame will depend on what we do. Typical out of training camp I like my guys to stay about 80% ready, that way a last minute fight we will be ready. We usually lift more with a little cardio in the off season but training camp transitions into more intense cardio with maintenance on the lifting. The strength previously gained will not subside before the fight. And we usually train for power year round.

What is your philosophy for MMA specific conditioning?

For MMA it’s about mental and muscular confusion. Now not in the way of P90x, but in the sense of not knowing what to expect. Also I study a lot of fights in the sense of bio-mechanics and try to mimic as much as possible in the training sessions.  I push them harder in training than any fight will ever be. That way when fatigue hits they know they have pushed harder in other circumstances. This theory will not be found in your typical book but it has worked. We train in hard circuits and intense weight lifting and power movements. For active recovery we do agilities and other things to keep heart rate up and fluid movement.

The value of a good coach to me is that he can see what the trainee himself can’t see, so that makes sense. What about the typical athlete? What are athletes doing wrong?

I would agree for the typical athlete. The average athlete does not see a mistake and then goes and tries to correct it. That is why we have coaches. For the most part in training the typical athlete does not know how to push themselves. The human body can do so much more than we think. Most times people are scared to push the limit with the fear of failure, hurt, etc. but that is when true growth begins both physically and mentally. Most athletes are not training the mind along with the body. The mind is a powerful tool. The mind will give out before the body will. The second thing athletes typically do wrong is not take care of the body through nutrition, hydration and rest.

What’s one of the most effective yet overlooked training “tricks” you can give us?

It’s simple. REST! Sleep is the number one tool for athletes but they do not take advantage of it. When we sleep we grow. The body releases hormones that aid in recover and rebuilding. Also along with that recover after sessions and letting the gas pedal off at times. A sloppy day training does not do any good so if you’re tired and sluggish after weeks and weeks of training, rest a day. This recovery will allow for a better next day instead of a possible injury.

Now that you’ve been in the business for a while, what surprised you? What shocked you?

Surprised me….probably the success I have had. It has been quit humbling the people and experiences I have had the opportunity to be a part of. The shocking part is the time you invest. I love what I do but I never expected the weird hours.

You’re one of the best Strength & Conditioning Coaches around and yet very few people know about you, what do you think about that? How can you go about rectifying it?

Well thank you for saying that.  I have a behind the scenes type of job. Most people do not see the work the fighters put in. The sweat, pain, agony and personal defeat all in the ride to stardom. That is why I love it because I see them grow. You learn to just go with it because the people that know the time and effort that you put in give you praise and reward. I didn’t start training so I could be seen; I wanted to help someone reach their potential. Just like biblical principles of doing good deeds not to be seen, I do my work to help not for achievement publicly. If it comes, that’s awesome and I feel honored.  It has been very humbling and amazing to be referenced by you and Ovince Saint Preux and some of the other guys in magazines, on TV and in interviews, that for me is enough. They know what I have done for them.

Who do you train in Knoxville? What MMA people have you worked with?

Oh in Knoxville I have trained tons of people from NFL, NBA and Olympic runners and Pro Soccer guys to college and high school athletes and I am currently strength coach at Christian Academy of Knoxville (CAK) where I have been blessed to be part of their two-time state champion football team as well as other state champions. In MMA I have had the honor of having Ovince Saint Preux, Rafaello Oliveria, Chris Wright, Matt Traylor, Scott Holtzman, Nick Gerhts, Chad Perine, Julio Gallegos. And Pro Boxer Alonzo Butler.

Thank you for taking the time to talk with us. Do you have an e-mail address people can contact you at if they want to take their training or their gym(s) to the highest professional level?

You’re more than welcome. I appreciate you asking for the interview. People can contact me via e-mail at nathanhoffmeister@hotmail.com or look me up on Facebook by searching for “Nathan Hoffmeister”. Learn more about Nate Hoffmeister and his services at www.cagestrength.com