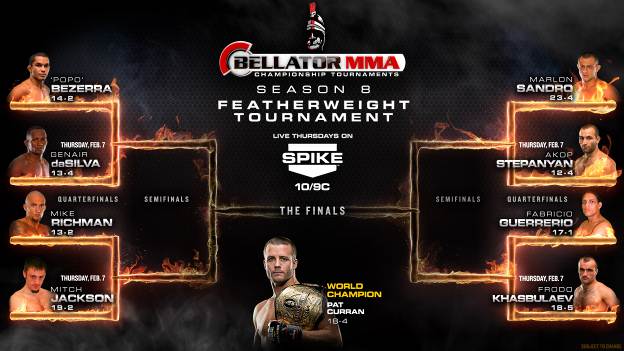 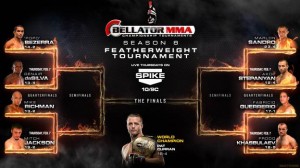 The event will broadcast LIVE starting at 10 p.m. ET on Spike, as well as in Spanish language on mun2. The preliminary card will be streamed LIVE and FREE on Spike.com starting at 8 p.m. ET.

Widely regarded as one of the best featherweights in the world, Marlon Sandro is primed for an extended tournament run as he takes on Russian finisher Akop Stepanyan in opening round action. After two tournament finals appearances, Sandro is ready for the next step and capture his first Bellator Tournament crown.

“There is nothing in this world I want more than the Bellator Featherweight Title, and this is my road,” Sandro said. “I love Bellator with all my heart and I know my opportunity is now.”

Armed with two of the quickest hands in MMA, Mike “The Marine” Richman will take on Bellator newcomer Mitch Jackson in a quarterfinal affair live on Spike. With 26 finishes between the two, it’s an opening round fight primed for fireworks.

“It feels great to be back in the tournament, and to showcase my skills on Spike TV for Bellator,” Richman said. “I’m going to out class Mitch Jackson and show him he isn’t at my level. He’s going to sleep, and then I plan on finishing the rest of the field and getting my title shot and that $100,000 prize.”

Two of the most exciting featherweights in the Bellator ranks go to battle when “Popo” Bezerra meets Genair da Silva in an explosive quarterfinal fight. Already 14-2 at just 25 years old, Bezerra is looking to elevate his game to the next level and embark on a long tournament run.

Tickets start at $40 and can be purchased at the following link: Bellator Tickets Available

The Bellator Featherweight Tournament will be rounded out with a classic Brazil vs. Russia clash as Bellator newcomer and submission ace Fabricio Guerrerio clashes with Magomedrasul “Frodo” Khasbulaev. After two quick finishes inside the Bellator cage, “Frodo” is gearing up for his first taste of The Toughest Tournament in Sports.

“After my last two fights, my time is now, and February 7th will be the start of my championship run,” Khasbulaev said.

“With a Middleweight World Title fight and the start of our $100,000 stacked Featherweight Tournament, February 7th from the Gwinnet Center is going to be a huge night live on Spike TV,” said Bellator Chairman & CEO Bjorn Rebney.