Interview: ‘Sugar’ Shane Mosley on his appreciation for the ‘art’ of MMA and upcoming bout with Paulie Malignaggi *VIDEO* 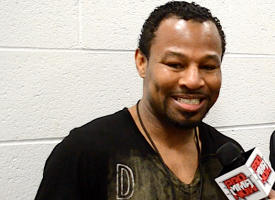 ProMMAnow.com (www.prommanow.com) reporter Daniel Theodore caught up with boxing icon “Sugar” Shane Mosley (46-8-1) who was in attendance at Bellator 85 this past week in Irvine, Calif. Mosley talked about some of the fights he was impressed with on the card and his familiarity with mixed martial arts.

Mosley discussed his appreciation for the various disciplines of mixed martial arts, and although he said he has tried a little grappling, we probably shouldn’t expect the 41-year-old three-division world champion to start following UFC President Dana White around the country and stalking him at press conferences asking for a shot in the UFC like our old friend James Toney did.

As for what’s next for Mosley, he said he has a bout tentatively scheduled against WBA Welterweight Champion Paulie Malignaggi (32-4) on April 27 in New York. If the bout takes place it will be Mosley’s third straight title fight, having dropped decisions to Saul Alvarez for the WBC light middleweight title last May and to Manny Pacquiao for the WBO welterweight title in May 2011.

Stay close to ProMMAnow.com for more on-scene coverage from Bellator 85.

One thought on “Interview: ‘Sugar’ Shane Mosley on his appreciation for the ‘art’ of MMA and upcoming bout with Paulie Malignaggi *VIDEO*”