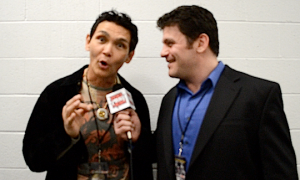 Guess who ProMMAnow.com ran into checking out some fights at Bellator 85? It was none other than kickboxing legend and martial arts movie star Don “The Dragon” Wilson!

“The Dragon” was kind enough to take a few minutes to talk with “Wolfman” about his fighting history, his thoughts on MMA and whether or not he would have competed in mixed martial arts had it been around when he was coming up.

“The Dragon” talked about a fight that was supposed to happen between himself and Dan Severn at one time, as well as a fight that was supposed to happen with himself and fellow martial arts action star Jean Claude Van Damme. Wilson said he would still fight “Jean Fraud Van Dumb” and even donate all the money to charity! — Now that’s something I would certainly pay to see!

Wilson discussed his sports and wrestling background, and also explained why he feels MMA is a safer sport than both boxing and kickboxing because the risk of brain injury is not nearly as high in MMA. Wilson also revealed which of the 30 movies he starred in were the top money makers for him.

Stay close to ProMMAnow.com for more on-scene coverage from Bellator 85.