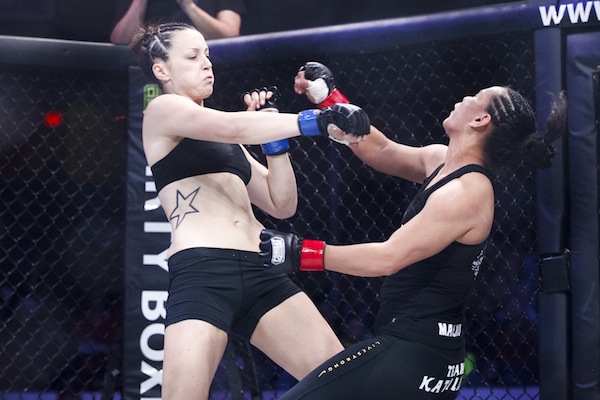 A buzz started building around Veronica Rothenhausler shortly after she scored two consecutive first round knockouts in just 5 seconds, which in itself would have many fans wanting to find out more.

“The Heartbreaker” made her much anticipated pro debut on Saturday at Invicta FC 4, with fans and spectators hoping she would do the same, and she did, defeating Katalina Malungahu 1:12 into round one.

Shortly after the fight began you could tell that neither woman had intentions of taking it to the ground, and maybe this was a mistake on Malungahu’s part, or maybe she just wanted to beat Veronica at her own game.

The ladies pressed forward aggressively and both came out swinging. You could tell this fight would not have a long lifespan and would definitely not be a three round game of MMA chess, someone was bound to get clipped, it was just a matter of time.

After a few brief encounters Veronica landed a perfectly timed straight right onto Katalina’s jaw, she dropped to the ground instantly and the referee called a stop to the action.

With a fourth knockout under her belt, it would be hard to claim the previous knockouts were just luck. Veronica quite simply comes into a fight wanting to take your head off. Some fighters are known for their technical ability and Jiu Jitsu, some fighters are great wrestlers and some have good stand-up and boxing.

It was Rothenhausler’s quick knockout finishes that earned her a shot in Invicta FC and it seems to have paid off for both her and the promotion.

When you are known for doing something, people expect you to do that thing every time. With that reputation comes positives and negatives, because you feel pressure to perform and deliver, but also worry about losing the reputation that got you to where you are.

In this case people will naturally come to expect a first round knockout from Veronica, so if she can keep performing it will do wonders for her career and definitely earn her new fans. It will be interesting to see how long it all lasts and how far she can take it.

I don’t personally expect Veronica Rothenhausler to win by first round knockout in every single fight, it wouldn’t be realistic to think that, but anything is possible. Her fight against Ashlee Evans-Smith at “Tuff-N-Uff – Festibrawl 2” in July, where she picked up her second consecutive 5 second knockout win now has over 142,000 views on YouTube, so people clearly like what they are seeing.

I am interested to see how Veronica’s career plays out and yes, I am looking forward to seeing another devastating first round knockout.