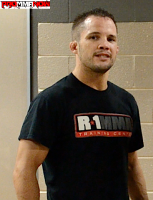 With Card coming into the fight off three losses and Richardson coming in with back-to-back victories many may have felt the bout was all but decided even before the first bell rang.

However, after a close back-and-forth first round, Card dropped Richardson early in round two with a left hook. Card then clamped on a fight-ending guillotine choke that left Richardson unconscious on the canvas and reminded fans why he was one of the fighters that helped build the XFC into what it is today and should not be counted out.

ProMMAnow.com (www.prommanow.com) spoke with Card immediately after the bout to get his thoughts on his performance and gauge his interest in making another run at the Xtreme Fighting Championships 145-pound title.