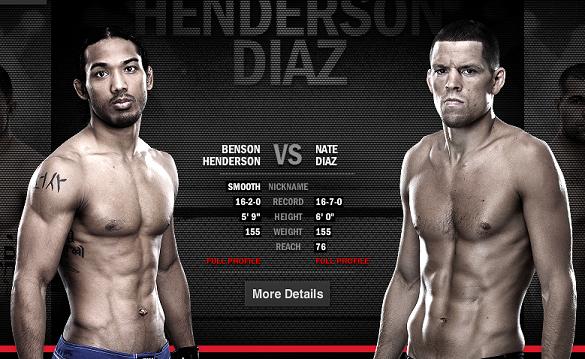 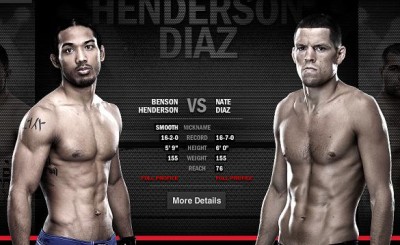 The UFC on FOX 5 event will be headlined by the UFC lightweight title fight between the champion Ben Henderson and the challenger Nate Diaz. This should be a great main event between two young fighters in their physical prime that seem to be improving on their game each and every time out. It’s a great style matchup between the wrestling and striking of Henderson going up against the striking and jiu-jitsu of Diaz. Let’s see how this one breaks down.

Nate Diaz (16-7) comes into this bout off the second round submission win and complete domination of the always tough Jim Miller. Diaz is riding a three fight winning streak as a lightweight since suffering back-to-back losses in the welterweight division. He has won 11 fights via submission and three fights via TKO, and has only been finished once in his career. He was submitted by Hermes Franca in just his seventh fight while Franca was already a grizzled veteran, but most of his losses have been against good wrestlers with solid submission defense. Diaz has an outstanding volume striking game, an iron chin, elite cardio, and is very dangerous on the ground with submissions. He lone weakness is takedown the defense historically.

Ben Henderson (17-2) comes into this bout off the controversial split decision win over Frankie Edgar to retain his lightweight title. He took the title from Edgar via unanimous decision in the previous fight. Henderson is riding a five fight winning streak since his lost loss, a unanimous decision loss to Anthony Pettis at the final WEC event two years ago to lose the WEC lightweight title. He has won two fights via TKO/KO and eight fights via submission. Henderson also has an early submission loss in his career, which is the only time he has been finished in MMA. Henderson has good striking with heavy leg kicks, elite cardio, decent chin, good wrestling, and elite submission defense. He doesn’t have any glaring weaknesses in his game.

Diaz is a slight underdog in this fight, and is probably worth placing a wager on in this one.

This is an extremely tough fight to call because of the performance Diaz displayed in his last outing against Jim Miller. Normally a fighter like Miller with good submission defense and wrestling would give Diaz all types of problems, but that wasn’t the case in that matchup. In fact, both Henderson and Diaz have beaten Miller with Henderson dominating him for a decision win while Diaz was able to submit him. They also have a common opponent in Donald Cerrone. Henderson owns two wins over Cerrrone(one via submission and one via submission), while Diaz won a unanimous decision against him last year.

This fight is going to come down to how well each fighter executes their gameplan. If Diaz is able to keep the fight standing he has an excellent shot at winning this fight. His volume striking and moving forward often keeps his opponents on the defense, and doesn’t allow them to get set to launch anything offensively towards him. He also has seemed to develop some decent power in his striking over the past couple of years, and while they may not look like much, the accumulation of damage from his strikes mounts quickly. He will need to check legs kicks better as past opponents have really taken it to him with those, and Henderson does possess very heavy leg kicks. Henderson will probably be able to take him down, but Diaz certainly has the submission game to give Henderson fits because of his length. However, I would say he chances of submitting Henderson drop quite a bit when compared to his chances of winning while keeping the fight standing.

Henderson’s gameplan should consist of heavy leg kicks while on the feet since Diaz doesn’t do a good job of checking them. It also helps Henderson negate the huge reach advantage that Diaz will have in this fight. Henderson will need to do a good job of mixing up his striking and transitions into takedowns. Also, he will need to use his strength advantage to put Diaz against the cage and do damage from there which will not allow Diaz to come forward and get off offensively the way he likes to. If he decides to take Diaz down he’ll need to work immediately towards passing his guard and at least getting to halfguard to eliminate most offensive threats Diaz can use off his back. Diaz has a great triangle choke and again his length could pose problems if Henderson plays around in his guard.

I think Henderson will take this fight via unanimous decision. My thought process is that Henderson can always take Diaz down if he’s getting lit up on the feet, and his submission defense should be good enough to avoid getting submitted on the ground. If Diaz is to win this fight it’ll probably have to be via submission. I hope you guys have enjoyed the previews this week, and be sure to join us on Saturday night for the LIVE play by play if you can’t watch the fights live.