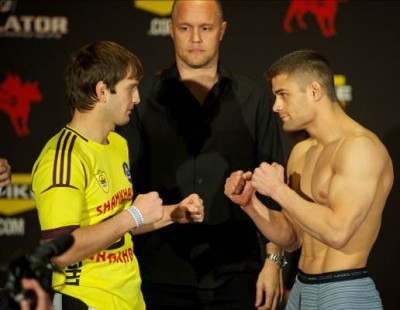 The Bellator 83 weigh-ins have been completed from Atlantic City, New Jersey in preparation for Bellator’s Friday night event which features the finals of the Bellator Season 7 Featherweight Finals. All the fighters made weight including the main event between Rad Martinez and Shahbulat Shamhalaev. The winner of that bout receives $100,000 and a guaranteed title shot against Pat Curran.

Bellator 83 will be broadcast LIVE on Friday, December 7th at 7:00 pm ET/6:00 pm CT on MTV2 and in commercial-free HD on EPIX, as well as in Spanish language on mun2. The preliminary card will begin at 6:00 pm ET/ 5:00 pm CT and streamed LIVE and FREE onSpike.com.

Be sure to make ProMMAnow (www.prommanow.com) your home for Bellator 83 LIVE play by play on Friday night.

The full results from the Bellator 83 weigh-in are below: