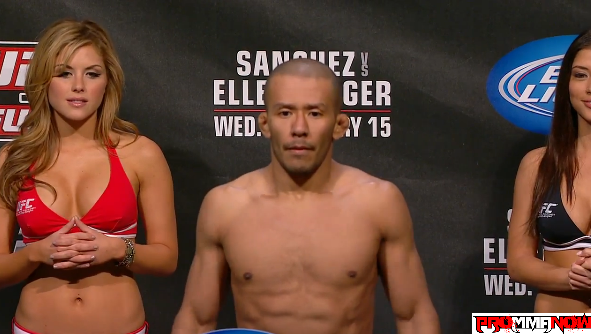 A new bout has been announced for the UFC 157 card as Ivan Menjivar (25-9) faces Urijah Faber (26-6) in a bantamweight matchup. The event is set to take place at the Honda Center in Anaheim, Calif, on Feb. 23.

The new bout was confirmed by UFC officials today.

Ivan and Urijah have met before back in 2006, where Ivan was disqualified for an illegal up-kick. Menjivar vs. Faber II is likely to be part of UFC 157’s main card which will air LIVE on PPV following the prelims which air on Facebook and FX.

Urijah Faber last fought at UFC 149 in July, where he dropped a unanimous decision loss to Renan Barao in a battle for the interim UFC bantamweight title. Prior to that he scored a second round submission victory over Brian Bowles at UFC 139 in November 2011. That victory followed a unanimous decision loss to current UFC bantamweight champ Dominick Cruz at UFC 132 in July 2011. Faber has a chance to get himself back into title contention with a big win over Menjivar.

Meanwhile, Ivan Menjivar was last in action at UFC 154 in November, where he picked up a first round submission victory over Azamat Gashimov. Prior to that he dropped a unanimous decision loss to Mike Easton at UFC 148 in July. That loss snapped a three fight winning streak Ivan had built up, defeating notable fighters such as Charlie Valencia, Nick Pace and John Albert. Menjivar will no doubt look to take a big step up the bantamweight ladder with a good performance against Faber.

Stay close to ProMMANow (www.prommanow.com) for all the latest UFC 157 news.