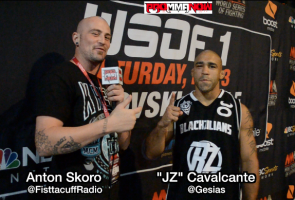 JZ talked about the satisfaction of getting his first finish in a fight since 2007, the positive aspects of finishing the fight in just 63-seconds and coming out unscathed as he gets ready to travel to Japan in two weeks where he will compete in the Shoot Boxing World Tournament 2012 (S-Cup) and could fight up to three times in one night (stand-up only).

Stay close to ProMMAnow.com for more on-scene interviews from World Series of Fighting.

Follow ‘JZ’ Cavalcante on Twitter at @Gesias, World Series of Fighting at @MMAWorldSeries and Anton Skoro at @FisttacuffRadio.