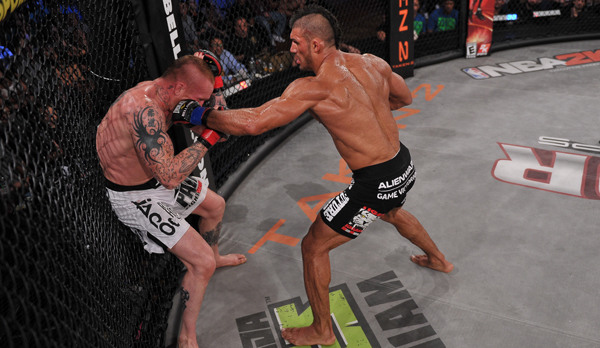 Bellator season seven rolls on. This Friday, the traveling circus stops at the Nutter Center in Dayton, Ohio with Bellator 78. The card features the semifinal round of the season-seven welterweight tournament. Despite some solid fighters, it might be the most anticlimactic tournament this season. Do we really think any of the final four can avoid a wrestling lesson at the hands of Bellator champion Ben Askren? Hell, Lyman Good is probably the favorite, and he has already been worked over by “Funky.”

Also, if you are wondering why it is called the Nutter Center, it is only because a rich guy named Nutter donated some money (Actually, in MMA circles, $1.5 million is known as “Anderson Silva Money”). The tournament is not the only anticlimactic element of this card. With that being said, there are solid fights.

Michail Tsarev vs. Lyman Good
In his last outing, the former champion affirmed what most Bellator viewers already knew. Good has enough boxing to defeat above average guys who can’t wrestle him to the ground. However, it was pretty obvious pretty early in the fight that “Judo” Jim Wallhead had nothing for him. Good failed to turn it up and finish the fight.

With that being said, Tsarev is a similar fighter to Wallhead. He has a pretty slick submission game, but he is not the best wrestler. On top of that, he might be a worse striker than the Brit. Look for Good to keep the fight on the feet and pick up another striking-based decision.

Marius Zaromskis vs. Andrey Koreshkov
Koreshkov defeated an opponent who looked over matched in the first round. On the other hand, Zaromskis overcame a superior striker with a broad and surprisingly diversified MMA game. He mixed in some solid clinch work, which in turn allowed him to land a few haymakers. The resulting knockdowns allowed him to win rounds and ultimately the fight.

Early in his career, Zaromskis was basically just a striker with some devastating finishing ability. If he could land the knockout blow, he would win the fight. However, if he could not, than he would drop fights to Che Mills (twice). Now, he is training at American Kickboxing Academy. He could take a big step forwarded after training with a quality team. A decision victory over Koreshkov will be the first big step for Zaromskis. Of course, if the Dream champion goes out and gets tapped, Mann Talk assumes no responsibility.

Alvin Robinson vs. Daniel Straus
Robinson is relatively strong on the ground, which is to say that he has enough game to defeat the Jorge Gurgels of the world. With that being said, he is a heavy underdog in this fight. Straus continually comes forward. He make his opponents work against the cage and on the ground. Look for Straus to dominate this fight and eventually wear out Robinson for a stoppage victory. The UFC vet’s only chance is to catch something off of his back, but Straus has been in there before with quality grapplers like Nazareno Malegarie and Patricio “Pitbull” Freire without tapping out.

Zoila Gurgel vs. Casey Noland
Gurgel had an odd 2010. She defeated perhaps the best female fighter in the history and won a womens title in a major promotion. However, detractors were still everywhere. The controversial judging in Gurgel’s wins over Megumi Fujii and Jessica Aguilar left fans with a lot of negative feelings. On top of that, Gurgel seemed to have such a huge size advantage fighting at 115 pounds. Now, she is back at 125 pounds where she probably belongs. She is still a big favorite here.

Noland is 4-2. She dropped her only previous Bellator fight via split decision. However, she does hold a respectable win over Strikeforce veteran Colleen Schneider. Gurgel should have very little trouble outclassing Noland on the feet en route to a stoppage victory. The question moving forward is how will Gurgel deal with wrestlers and grapplers without a hulking size advantage. The good news is that the 125-pound division has developed a bit during her absence. If Bellator decides to host a tournament in said division, there will be women ready to fill it.